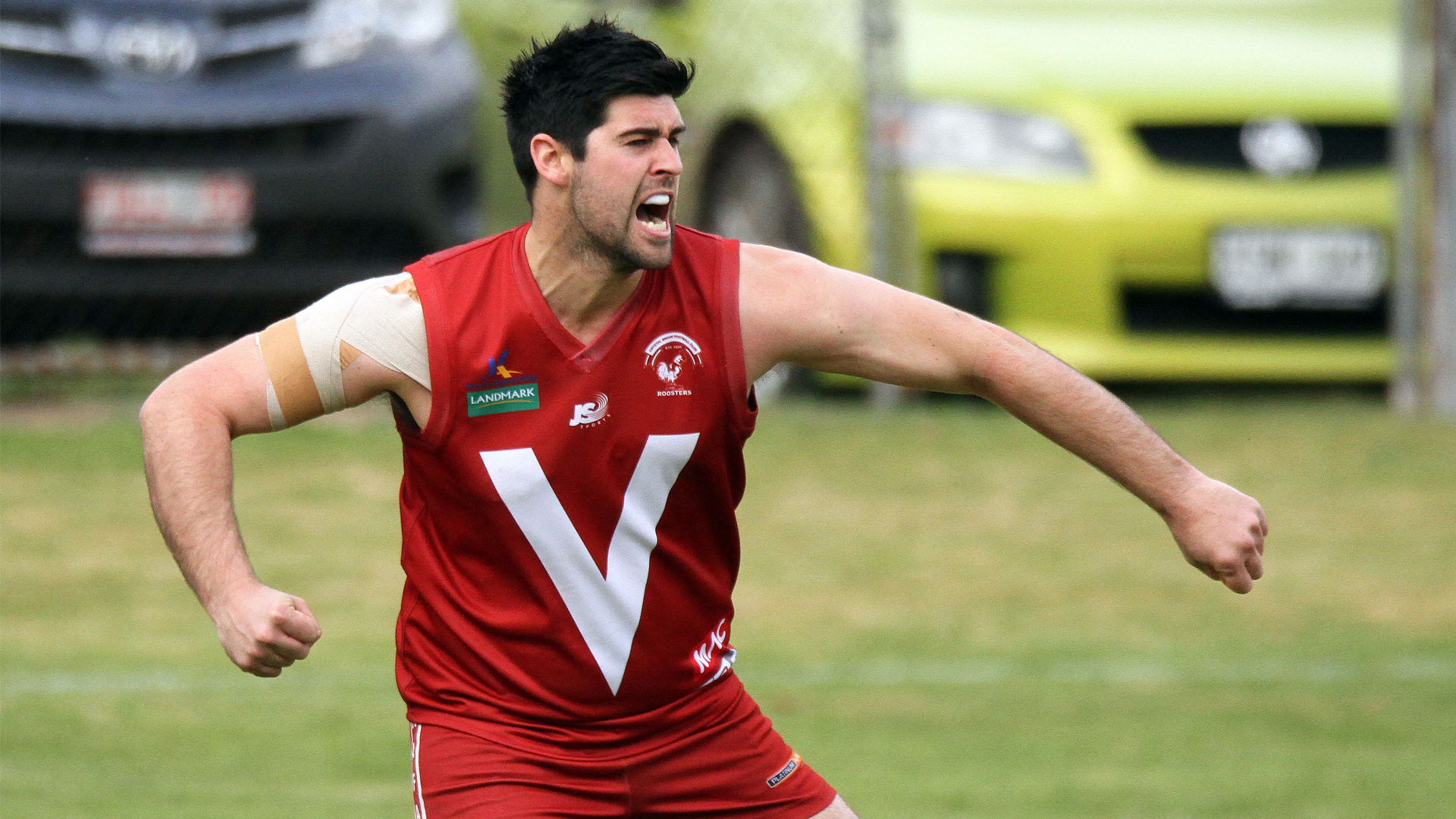 In a top-of-the-table clash between the two teams that have shared premierships over the past three years, Broughton Mundoora travelled up the highway to take on the Crystal Brook Roosters – and it was a game befitting of the top two teams.

The visiting Eagles were only one point ahead at the first break, then two points in front at half-time before kicking four goals to two in the third quarter.

The competition’s leading goal kicker, Gene Robinson, had a bag of five goals in this game following his 10-goal effort the week before against Orroroo.

Brooks’ midfielder Luke Kapitola was the Roosters best, followed by strong full forward Daniel Hill who finished with a haul of six goals. Luke Bartlett, Adam Kupsch and Brad Heard also had an influence on this contest for the Roosters.

Nick Hombsch was the Roo’s best with an eight-goal haul and Denis Redden – the son of North Adelaide champion and SA football Hall of Famer Mick – was second best, kicking three goals.

Productive midfielder Josh Lawson, Chas Ackland and the O’Dea brothers Brodie and Liam all played a role in the victory.

For the Magpies, the ultra-consistent Nick Rynne was again their best player followed by Jess Larcombe with two goals.  Young talent Josh Weatherley, Henry Hall, Paul Kelly and Matt White were all serviceable for the visitors to Orroroo Oval.

In what was an important game for consolidating a position in the top four, the round nine clash between Southern Flinders and Booleroo Melrose Wellington (BMW) was a thriller, with Southern Flinders winning by just four points.

The BMW Lions led at each of the minor breaks – by three points at the first break, six points at half-time and extended to 23 points at lemons.

However, the Tigers charged home with six goals and three behinds in the final quarter to the Lions’ two goals, collecting heart-stopping triumph, 10.9 (69) to 9.11 (65).

“We started to take the game in the last quarter,” Southern Flinders coach Ben Brown explained.

“It was a pretty even first half, but BMW had the better of the third term, but were a little inaccurate.

“We took the lead with a couple of minutes to go. The Lions pushed forward let but couldn’t get that last shot at goal.

“From an impartial perspective, it was an intriguing game of football.”

Big ruckman Brady Zwar was best for the Tigers with a massive last quarter, followed by 17-year-old half forward Joel Ambjerg-Pedersen (three goals), whilst on-baller Trevor Harradine, Craig Zanker and Ziek Kay also had their moments.

Former Mail Medalist with Kapunda in the Barossa Light Gawler competition in 2013, and as a 16-year-old in the Northern Areas, Brad Taylor was the BMW Lions’ leading performer with a four-goal effort.

Lachlan Robinson, Lukas Kanger and brother Aleksander, and Kendrick McCallum were all serviceable for the vanquished in a top-quality exhibition.

Top of the table Kimba Districts Tigers were tested by Ports at Kimba Oval last Saturday in their round seven clash.

The scores were close at quarter time with only four points separating the sides, but an outstanding second quarter by Kimba with seven unanswered goals changed the course of the match.

After a more even third quarter, The Magpies actually won the last term kicking 5.3, while Kimba could only manage 1.1.

Tommy (Thomas) Klingberg was best on ground for the Tigers followed by Ryley Maitland with three goals, while Darcy Noel, David Dunbar, Bailey Francis and Brook Seal with five goals were also solid.

Other multiple goal kickers for the Tigers included the evergreen veteran Matthew Vandeleur, Ben Clements and Aaron Johnson, each kicking a pair.

Tyrone Bishop was Ports’ best player followed by Bradley Hannemann and Sydney Masters who snaffled six goals. Masters has kicked a total of 24 goals across five games, including yields of seven, six and six in his past three games. Jake Turner, Bradley Wake and Caleb Johnston all deserve a mention as well.

Meanwhile the game between the Eastern Ranges and the Cowell Cats at Rudall was a one-sided affair.

The battle between fifth and sixth-placed Eyre United and Lock in the Great Flinders Football League at Ungarra Oval was close all afternoon.

The Eyre United Saints led by seven points at the first break while Lock had taken the lead at half-time by the smallest of margins.

Levi Brown, Damian Kelly and Michael Arbon were also solid contributors in this win for the Roos.

United Yeelanna maintained its unbeaten streak this season with a comfortable 47-point win over the Ramblers. The Eagles were four goals in front at half-time and edged further ahead from then on.

Jaxen Norton was the Eagles’ best followed by Jason Ridley and Matt Dyer.

Central District triple premiership forward Daniel Havelberg kicked eight goals in the win and now leads the competition goal scoring ladder, having kicked 40 majors in the six games he has played this year.

Big forward Kerren Hall was effective with three majors while the mercurial Xavier Watson and Luke Rowe both finished with two.

Premiership player with the Brinkworth Spalding Redhill Tigers Jack Haarsma has returned home to play this season and was best on ground for the Ramblers, kicking three goals, while former Adelaide Crow Robert Shirley finished with two.

Michael Franklin, Jesse Rule and Logan Dennis were all competitive against the Eagles.

The contest between the Cummins Kapinnie Cougars and the Tumby Bay Football Club was a tight affair with only one point separating the sides at half-time.

Former state country ruckman Levi Konitzka (and son of Waybacks legend Henry) was outstanding for the Cougars while Brodie Laube, Lochie Paech, Damon Scott, Jacob Watson and Brad Hazelgrove all had their moments.