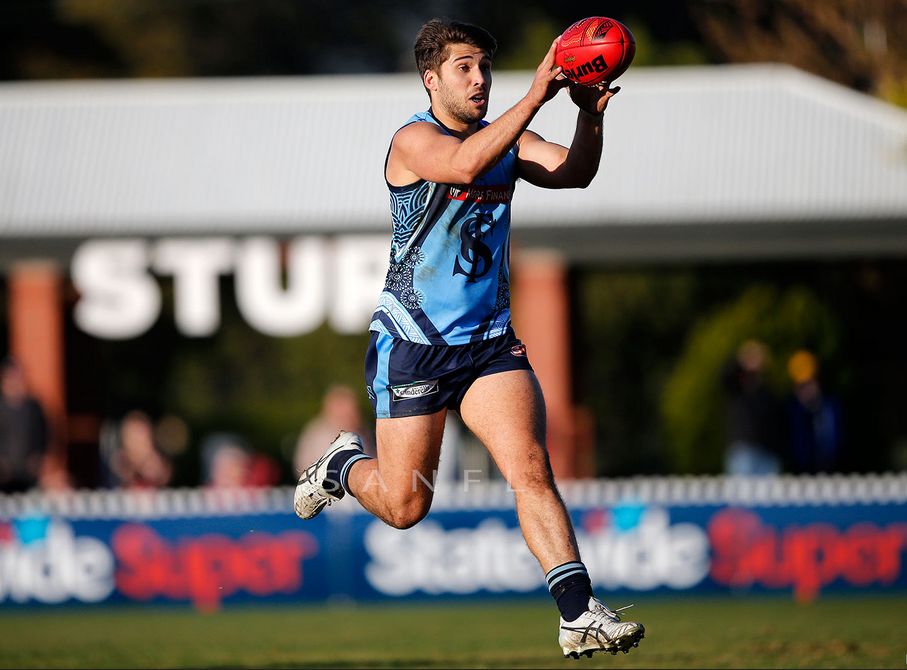 It is the debate which rages on the terraces at SANFL venues throughout metropolitan Adelaide.

Who are the best players in the Statewide Super League?

At the start of the season, SANFL Media Producer Zac Milbank named his Top 50 players.

Now, he has joined forces with SANFL Budget Editor Peter Cornwall to refine the list to incorporate the string of stunning performances throughout the minor round and on the big stage in September.

Stay tuned to the SANFL website to see each segment of 10 players released, comparing them to those selected prior to Round 1. Each player chosen needed to play at least 10 matches in 2019 to qualify.

After announcing players 21-30, below, we continue with players 11-20 as we edge closer to finding out the top 10 playing in the Statewide Super League.

The bullocking on-baller was the Doggies’ standout all season. The elder Schiller sibling wasn’t afraid to crash in, win the hard ball and set his team-mates on their way, in particular with his pinpoint handballing. A fierce tackler, the 27-year-old averaged 26 disposals and seven clearances as he romped home to a comfortable win in the Norm Russell Medal count for Central’s Best and Fairest. Named on the interchange of The Advertiser SANFL Team of the Year.

Runner-up in the P. T Morton Medal count for Sturt’s Best and Fairest, Battersby emerged to be his team’s most reliable player at the stoppages. The 23-year-old led the competition for clearances, averaging 7.3 while also chalking up 24.4 disposals per game in 2019. With a changing of the guard at Unley through a series of high-profile retirements, the former Crows rookie looms as one of the Double Blues’ most important players next year. Looms as a strong candidate to be the club’s next captain.

Set to join Battersby in Sturt’s midfield next season, Davis’ on-field output will be missed by his former club South Adelaide. Posted his second successive top 10 finish in the Magarey Medal while also placing fourth in the R. O Sheaman Medal as voted by SANFL coaches. The 23-year-old averaged 22 disposals and booted 21 goals for the season after regularly being shifted forward to find a goal for the Panthers. Tough to match up on inside the centre square at 194cm.

A pillar of strength for the Bays in their breakthrough premiership season, Proud backed up his Best and Fairest in 2018 with a third placing in the J. H Ellers count this year. Rewarded with selection in the victorious West End State team, Glenelg’s vice-captain was named at full back in The Advertiser SANFL Team of the Year. The 27-year-old, who averaged 15.6 disposals at 86 per cent disposal efficiency, is the likely replacement as skipper when premiership captain Chris Curran takes a year off for a work placement in 2020.

Woodville-West Torrens could hardly have asked for more from the former Swan in his first season of SANFL footy. The fourth-generation Eagle didn’t arrive with any fan fare but was quick to forge a reputation as one of the competition’s best midfielders. Winner of the Eagles 2019 Club Champion Award, Foote ranked in the league’s top 10 for possessions, averaging 25, led the league for inside-50s – the only player to have topped 100 – but also showed a strong defensive side by being second highest tackler after the minor round.

Talk about a lethal left foot. When Reynolds wheels onto it on the half-forward line, there’s good reason for opposition defences to fear the worst. The former Magpie’s remarkable conversion rate – he kicked 53.19 this season – is better than any other league footballer Australia-wide over the past three seasons. The 24-year-old’s performance in the Preliminary Final – in which he booted five goals – was a major catalyst to the Bays earning a Grand Final berth. Named at centre half-forward of The Advertiser SANFL Team of the Year, Reynolds also placed seventh in Glenelg’s Best and Fairest.

Rocketed up the rankings late in the season on the back of his stunning performance to win the Jack Oatey Medal as best afield on Grand Final day. One of the Bays most loyal stars earned the reward he richly deserved for doing the hard yards early in his career when he racked up 28 disposals, eight tackles, seven clearances and four inside 50s as the Tigers broke their 33-year premiership drought. The 27-year-old averaged 23.7 disposals, six tackles and seven clearances for the season.

Again forced to do the majority of the Bloods’ heavy lifting in the midfield when Will Snelling (Essendon) and John Noble (Collingwood) were selected in the inaugural AFL Mid-Season Draft. Runner-up in the Neil Kerley Medal as West’s Best and Fairest, the 27-year-old averaged 27 disposals and five clearances while also earning selection in the West End State team which defeated the WAFL in Perth. Only registered less than 20 disposals once in 2019, when forced from the field before half-time with an eye injury in Round 17.

There are some players SANFL coaches have to concede are just about unstoppable and no doubt they will be pleased Riley’s time at Unley has come to a close. The bullocking, desperate, determined contested-possession winner racked up a staggering 18 clearances in his penultimate game to prove he leaves the Double Blues at the top of his game. A key factor in the Blues’ back-to-back flags of 2016-17, the 27-year-old’s presence will be a significant one to fill for Sturt as he lines up for the Lobethal Tigers in the Hills Football League.

He may not quite have had the dominant season he did last year in his first SANFL season when he helped lift the Roosters from bottom to top but the numbers stacked up for this influential midfielder. Courageous Sandgroper Tropiano averaged 27 touches a game and was the leading tackler in the league, with 106, illustrating his enormous workrate. Winner of the Barrie Robran Medal as North’s Best and Fairest, the 27-year-old will be difficult to replace as he heads home to Perth for 2020.