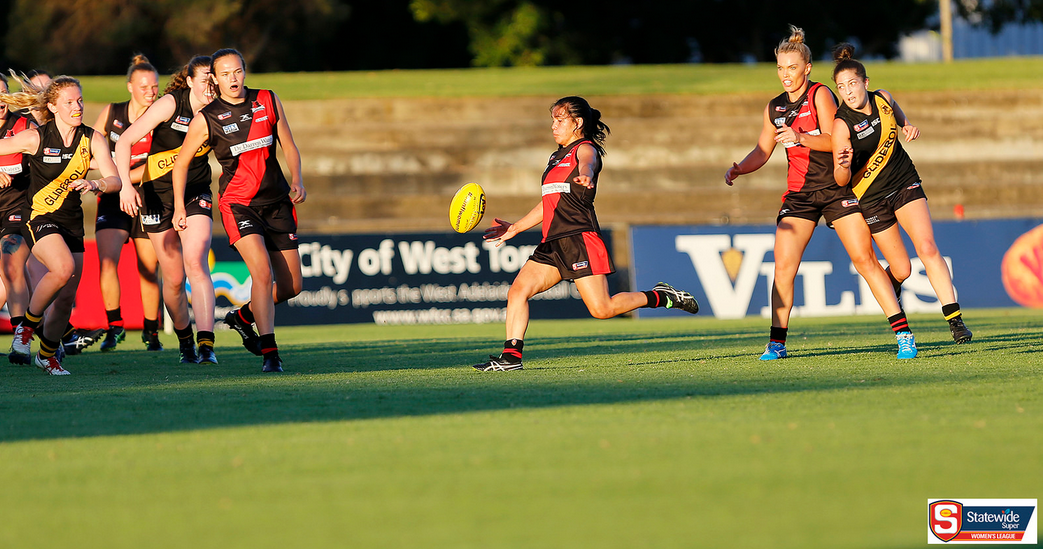 As Round 1 of the SANFL Statewide Super Women’s League kicks off on Friday night, Zac Milbank has released his Top 20 SANFLW player list.

1) Rachelle Martin (West Adelaide) – Inside Midfielder
A genuine ball magnet, the younger of the Martin sisters threatens to take her game to another level in 2019. Her older sibling Hannah has been drafted by the Crows and there’s no reason why Rachelle can’t join her in 2020 if she continues her ball-winning ways.

2) Georgia Bevan (Sturt) – Midfielder
The former Crow was a dominant force when she appeared for the Double Blues in last year’s Statewide Super Women’s League. Now back with Sturt full-time, she looms as a genuine match-winner while stepping up to be co-captain.

3) Caitlyn Swanson (Sturt) – Midfielder
A key member of The Advertiser SANFLW Team of the Year in 2018, Swanson is arguably the most consistent player in the competition. Joined by Bevan as the co-captain at Unley, they are set to form a dangerous tandem.

4) Cheyenne Hammond (South Adelaide) – Defender
Hammond displayed her talent in last year’s Statewide Super Women’s League Grand Final, winning the best afield medal with 22 possessions rebounding from defence. Could she take her game to another level by pushing into the centre square this year?

5) Monique Hollick (Norwood) – Midfielder
Arguably the fittest player in the competition, the former Crow had a huge influence for the Redlegs last year. Uses her natural running power to advantage by getting to multiple contests and hitting the scoreboard regularly.

6) Leah Cutting (Norwood) – Ruck
With Jess Foley being drafted by the Crows, Cutting rises up to be the best ruck in the competition. Not only has an influence with her hitouts but also acts as an extra midfielder when the ball hits the ground. Has also accepted the challenge to be co-captain this year alongside Bek McMahon.

7) Chelsea Biddell (West Adelaide) – Tall Utility
Named in the forward pocket of The Advertiser SANFL Team of the Year in 2018, Biddell is the most versatile player in the competition. West coach Shane Moon could comfortably ask her to play any position on the ground, even ruck, and Biddell will play her role with no fuss.

8) Hannah Munyard (South Adelaide) – Midfielder
One of the most exciting young midfielders in the competition, Munyard was pipped by South team-mate Nikki Gore for last year’s Powerade Breakthrough Player award. Possesses genuine footy smarts in knowing exactly where to position herself at stoppages.

9) Sophie Armitstead (Norwood) – Midfielder
Another former Crow desperate to make an impact full-time in the SANFLW. Should be a significant boost to the Redlegs’ midfield brigade, particularly if she gets a much-deserved clean run with injury.

10) Stephanie Walker (Eagles) – Midfielder
Hard to quantify the impact Walker will have in SANFLW as she approaches her debut season but her pedigree suggests she will be one to watch. Played for GWS in season one of the AFLW, Walker has already been named vice-captain as she looks to rekindle her passion for the game.

11) Jaimi Tabb (Eagles) – Midfielder
One of just two South Australians in the AFLW Academy, Tabb was a popular pick by the SANFLW captains to make an impact this season. Has crossed over to the Eagles where she is expected to thrive under the tutelage of coach Tess Baxter.

12) Abbie Ballard (West Adelaide) – Midfielder
Earned a Powerade Breakthrough Player nomination late in 2018 to suggest big things are on the horizon this year. Will be a key cog for the Bloods in the centre square, where she is expected to team up strongly with Rachelle Martin.

13) Montana McKinnon (South Adelaide) – Ruck/Tall Forward
Joins Jaimi Tabb as the other Croweater in the AFLW Academy for good reason. Incredibly mobile and athletic, McKinnon is entering her third SANFLW season which could see her inject even more consistency into her game. Like Leah Cutting, she becomes an extra midfielder when the ball hits the ground while also gaining plenty of distance with her kicks.

14) Jaslynne Smith (South Adelaide) – Defender
The other half-back in last year’s The Advertiser SANFL Team of the Year, Smith has the opportunity to shine even more in 2019 after the extreme turnover in personnel at Noarlunga during the off-season. Could she also play in the midfield with Hannah Munyard?

15) Rhiannon Busch (Norwood) – Midfielder
One of the unheralded consistent performers in SANFLW last year, Busch will get some much-needed midfield assistance at The Parade this year. Hits the season in strong form considering she kicked four goals in a best afield display for Southern District in Darwin last weekend.

16) Nadia von Bertouch (North Adelaide) – Tall Forward
Elevated to the co-captaincy with Leah Tynan, von Bertouch was a solid performer last year who will now have more opportunity to shine in the wake of several star North players being drafted to the AFLW. Could she make an impact as a versatile ruck this year?

17) Elyse Haussen (South Adelaide) – Midfielder
A vital ingredient in South’s midfield for last year’s premiership, Haussen has the opportunity to raise her game to another level in 2019. Has the ability to find plenty of the football and be constructive with her disposal.

18) Ellie Kellock (Glenelg) – Midfielder
One of the Tigers’ few bright spots in a difficult season last year, Kellock was a fitting winner of the Bays’ Best-and-Fairest. Set to be the vice-captain in 2019, expect her to become her side’s most valuable player this season.

19) Tash Farrier (Eagles) – Midfielder
The Eagles’ co-captain attracted plenty of interest when rival SANFLW players were asked who to watch this year, with one rival coach earmarking her as a difference-maker. Despite being new to the sport, Farrier loves the tough stuff having previously represented Australia in Ice Hockey.

20) Bek McMahon (Norwood) – Utility
Premiership captain who still impacts on the outcome of matches in the twilight of her career. Big game performer as evidenced by kicking vital goals late in last year’s Preliminary Final and Grand Final, the former to put her side in front at Prospect. Equally adept in all three sectors of the ground.