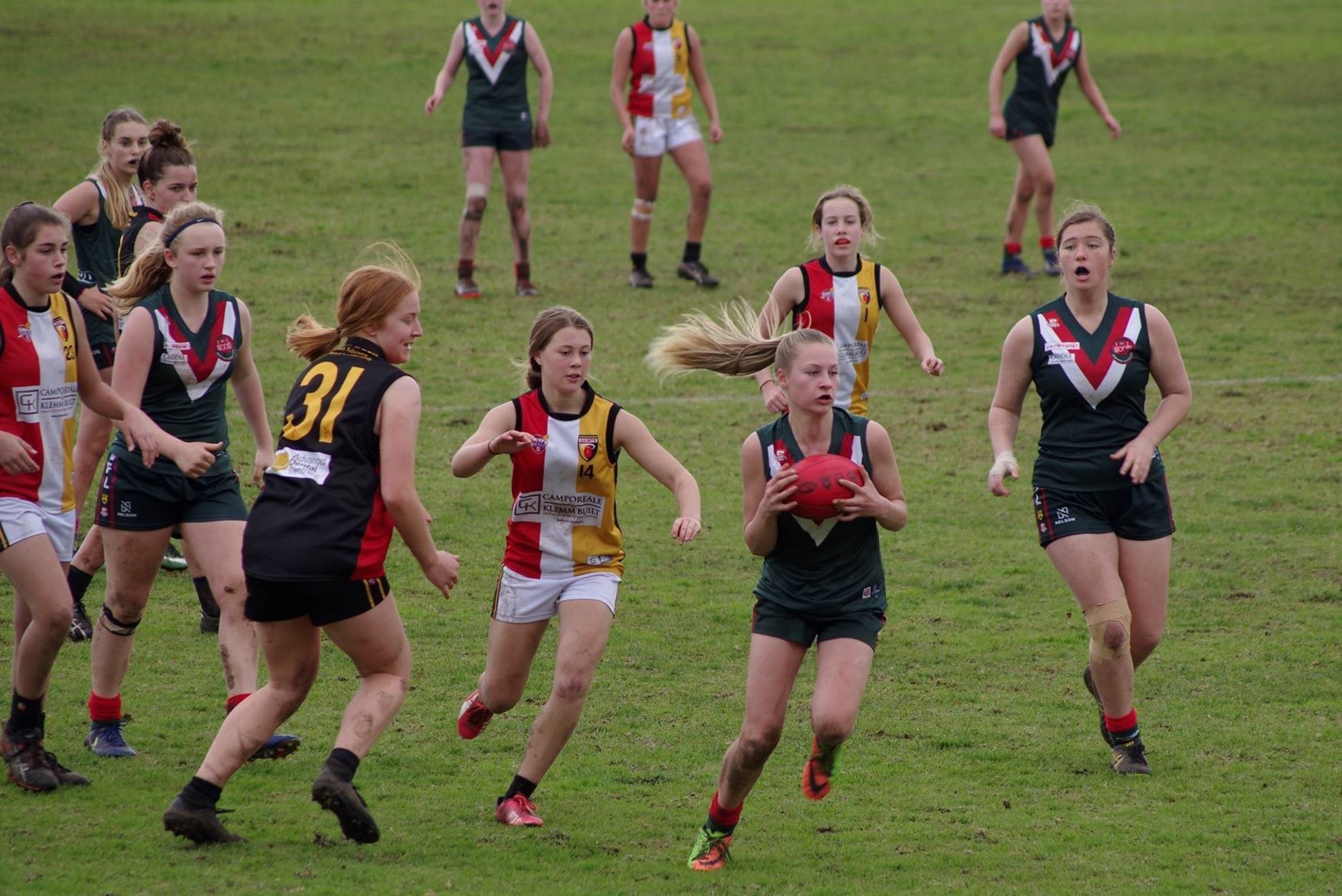 Results are going in favour of Blackwood Football club as its growing number of junior girls’ teams continue to enjoy success this season.

At the time of publication, the club’s under 16 girls were clear top of the table, but Blackwood’s coaches won’t be caught short as they look to emulate SANFL Statewide Super Women’s League champions South Adelaide and go back-to-back this year.

Co-coach Damien Venning is proud of his girls’ eagerness to train and will to improve – none more so than his daughter, Zoe, who debuted for SANFL Women’s team West Adelaide earlier this year.

“This group has been together for a while now. Some of these girls I even coached in primary school.”

The club has benefited from its ties with nearby Blackwood High School, which runs a Special Focus Australian Rules football program for boys and girls from years 8-11.

The girls have also benefited from Damien’s knowledge as a physiotherapist, educating them about the essentials of injury prevention and management.

As with many girls playing SANFL Juniors, Blackwood FC also has a number of girls combining their love for footy with other sports and commitments. These sports include softball, netball, basketball, and ice skating – just among the under 16s team alone.

“We have girls that are involved in academies, have been in the SANFLW Competition and they’re at that age where they play multiple sports, so it’s been a challenge to manage who’s playing,” says Damien.

While the selections vary each week, Blackwood has praised the strength and uniformity of the competition in SANFL juniors.

“It’s such a tough comp, every week could go either way. If you’re not on, other teams will be quick to capitalise,” he said.

“It’s great to have. The girls are getting so much better so quickly, they get a competitive hit out every week.”

SANFL’s Under 16 Girls Division 1 has incidentally combined a decorated field of teams entering the competition from various zones.

“Our division has three different Premiers from last year alone and five grand finalists. The other couple of teams aren’t bad either.”

This is Damien’s 15th year in the coaching game – it got started in memorable fashion.

“I took a year off when I finished playing but my wife was annoyed at me being home all the time, so she encouraged me to get back out there,” he said.

Damien has since spent a seven-year stint at West Adelaide, starting with the under 18s before assisting with the SANFL men’s side.

He then coached South Adelaide’s under 15s for three years, before returning to West Adelaide this year to help the Under 16s to a grand final berth.

But it’s with his junior girls that he’s had the most success. Half of his current team were triumphant over Mitcham FC in the Under 14s Division 1 last year, after thrice losing to them in the regular season.

Whilst oval and changerooms space is tight at Blackwood, the club has been as productive as possible to ensure its six junior girls teams get valuable training time.