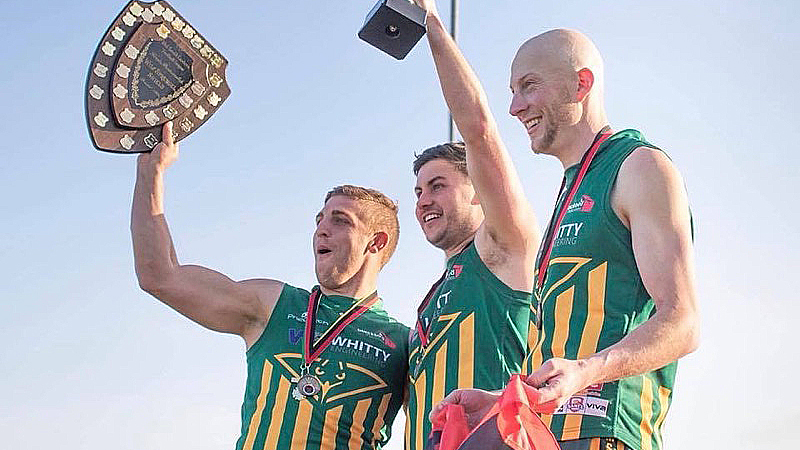 In the fourth of a series of articles, Peter Argent looks at a quartet of new and returning coaches in the Western Border, North Eastern, Broken Hill and Barossa Light Gawler leagues.

After four years at the Mount Burr Mozzies, which included three flags – two as the playing coach in the Mid South East competition – Tom Renzi is moving across to Casterton Sandford in the Western Border Football League as playing coach.

A teacher at Mulga Street Primary School in Mount Gambier, Renzi, 29, comes from both a football and soccer background having played Premier League Soccer with Birkalla whilst living in the city studying his degree, along with playing Australian Rules at Edwardstown FC.

“I like to play an attacking brand of football and have strong, clean ball use,” Renzi said.

“Coming from a soccer background helps with the technical side of football.

“The Cats have a passionate football community within the township of Casterton and we’re keen to have a successful year.”

Renzi also said the Mid South East League was very much an inside contested-ball competition and that he was expecting its Western Border counterpart to be and more free flowing, open and skills-driven game.

Originally from the Lynds Farm Power Football Club as a junior in suburban Hobart, Jackson O’Brien will take over the playing coach role for the North Clare Roosters in season 2020 of the North Eastern League.

“I was an assistant to Peter Cook in 2019 at North and for the previous two years, with Clarence in the Tasmanian Football League, was the right-hand man to Jeromey Webberley, a former Richmond listed player, so I see this as an natural progression,” O’Brien said.

“I’ve always wanted to be involved in coaching.”

O’Brien started his senior football with the Clarence Football Club and had a season with the Tassie Devils in the VFL in 2008, before coming back to Clarence and playing in a pair of flags.

He spent the 2013 season in SANFL ranks with Central District before two years with the Angaston Panthers, during which time he also represented SA Country against WA.

“I definitely prefer an attacking brand football and that’s the type of game I’ll hopefully develop.

“One of the great mentors I took a lot from was Brett Geappen – a natural leader and someone I looked up to and was determined play my best under.

“Having Roy Laird as a coach was great as well.”

O’Brien played Under-15 SA schoolboys, Under 16s Nationals and Under 18 football for Tasmania alongside players such as Tom Bellchambers, Mitch Robinson and Tommy Collier.

Meanwhile in Broken Hill, Mat Garrick is the new coach of the North Broken Hill Bulldogs.

“I was born a block from the Jubilee Oval and have been a Bulldog all my life so this is a great honour to coach the club,” said Garrick, who has just turned 30.

“I started in the coaching caper, helping my father Peter – who is a bit of a legend locally from a junior coaching perspective – as his runner in under 12s and under 15s at North.

“I have also spent the last three and a half years coaching the GWS Academy in town, which has been fantastic.

‘I must say, I’m a defensively-minded coach who doesn’t mind grinding out of win.

“I’ve had a number of good mentors along the way, including former North coach David Ruddock, which will be a little interesting as he’s coaching Wests next year.

“Naturally my father Peter has been there since it all started.

“Bulldogs legend Rodney Crampton is another, along with senior player Brett Johnson.”

Garrick will have Ayrton Walker (the older brother to Tex Walker) continue as an assistant, along with Brad Pressler.

Four-time Premiership coach this decade with the Waikerie Magpies (2014, 2106-18) Shayne Stevens will take over as the senior coach of the Barossa District Bulldogs in 2020.

Originally from the Reynella Wineflies, Stevens played senior football with South Adelaide (approximately 60 reserves matches), the Strathalbyn Roosters and a season with Imperials in Murray Bridge before moving to the Magpies in the Riverland competition where he won three flags.

“I’ve had a number of important coaching mentors along the way including Craig Griffiths, Tony Fielke, Lyndon Bishop and Darren Dean,” said Stevens, who took a break from coaching this year.

“I’ve taken pearls of wisdom from each.

“I like to see in attacking brand of football but also understand the Barossa is more a tighter, inside game than we see on the big grounds in the Riverland.”

A teacher at Morgan Primary School, Stevens will travel down to the Barossa to undertake his duties with the Doggies.