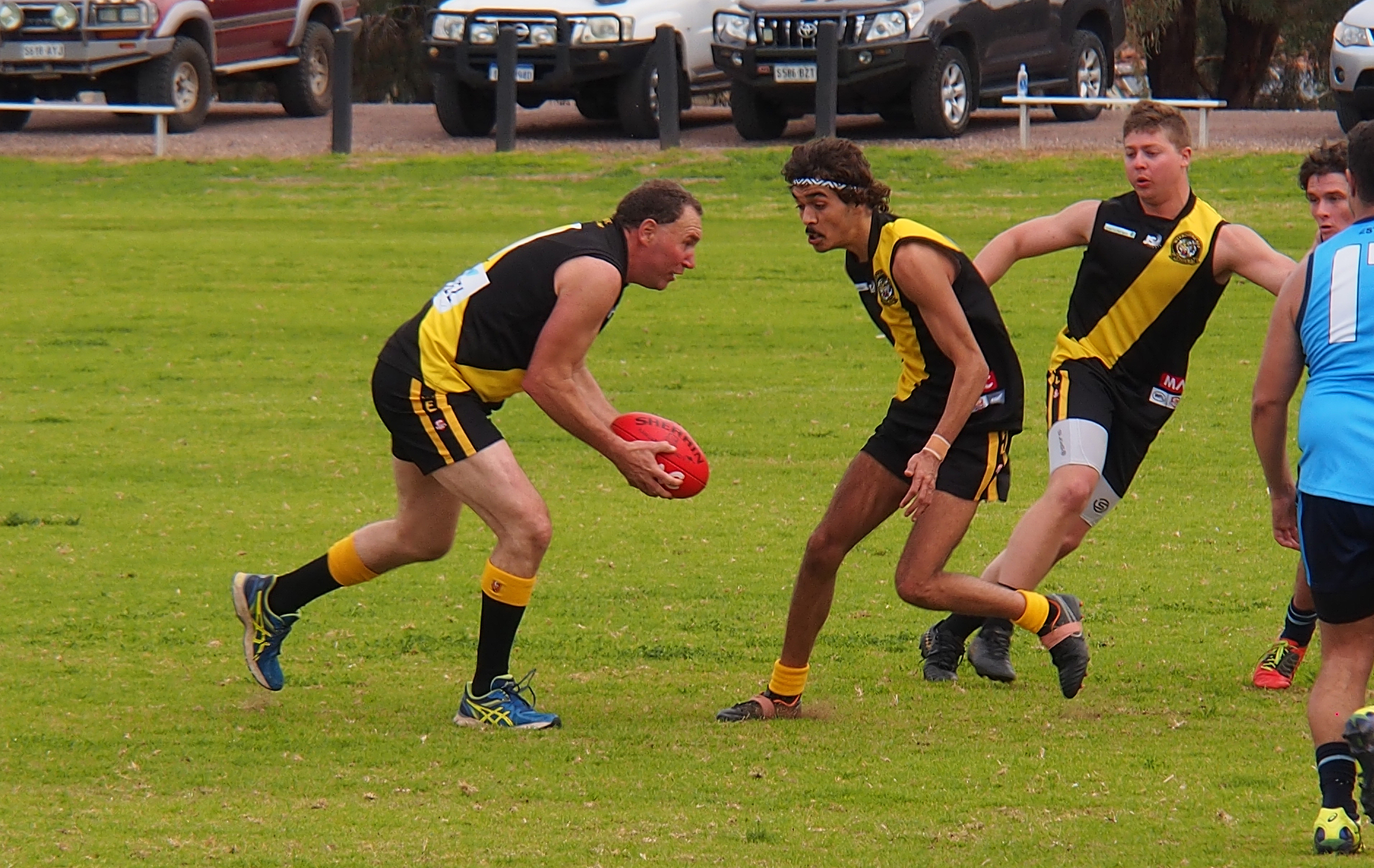 Weeroona Bay’s Brenton Cabban etched himself into local football folklore earlier this month when he played his 500th senior game in the Tigers’ clash with the Roopena Roos at Memorial Oval.

“It was a pretty proud moment – to join the likes of fellow Whyalla football is John Taylor from North and Jim Huish from Central’s with 500 games – is pretty special,” Cabban told SANFL after his milestone Whyalla Football League game played on August 17.

“I played 258 A Grade games. I’d like to be known as an A Grader who played a few B grade games, which that means I need to retire before my 516th match.

“The accomplishment means a lot to me because I achieved it at our club.

“I had a couple of old times at the club, Tassie Stevens and John Peatfield involved, which was important to me.”

Commencing his senior football back in 1986, Cabban regarded the 1995 premiership over West Whyalla, when Weeroona Bay came in as underdogs, as another highlight.

“There have been two A grade flags and a handful of B grade premierships along the way,” Cabban, 49, said.

“Most importantly, I’d like to thank my wife, Mel.

“Also mum and dad, Marlene and Phil have been tremendous support along the way.”

Cabban joined the Tigers in 1986 as a 16-year-old and made his A grade debut on June 22 that year, against the South Whyalla Demons.

Between 1992 and 1994 he was Weeroona Bay’s league team vice-captain, in his first year as runner up in the club’s best and fairest.

In 1994, Cabban snuck in a Reserves flag, producing a best on ground performance on Grand Final day.

There were consecutive A grade flags in 1995 and 1996 in the Whyalla Football League and in the second of those two titles he was rewarded as the competition’s best backman.

Quite remarkably, aged in his 40s, Cabban won a Reserves best and fairest at the Tigers in 2013.

His daughter Amber is following the family football tradition, currently coaching AFL Auskick at the club.

Cabban joins a healthy list of country footballers in the 500 club, with Myponga farmer and milkman Barry Clarke (a partner in Fleurieu Milk) becoming the longest serving country footballer in South Australia in 2018 when he leaped ahead of Ken Frankel who played 643 games with Alawoona, Ramblers and East Murray.

Tom Tierney, who played 631 games between 1958 and 2008, is third currently – he played at Hawker, Balaklava, Curramulka, Streaky and Tumby Bay.

Merv Rodda, who played between 1951 and 1986, participated in 600 games with Mangalo, Cowell, Gawler Central, Robertstown and Rudall.

With 15 games so far in 2019, John Taylor has now played 568 games for North Whyalla, elevating himself in to sixth position overall.

Anthony Pym from the United Football Club in the Adelaide Plains league played 550 games as did Ken Follett from Langhorne Creek, Strathalbyn and Goolwa.

The other 500-club member in Whyalla, Jim Huish has played 540, have played two games last year.

North Broken Hill’s Jason Harwood joined the 500-club in 2018 and played two A grade games in the Silver City competition that year. He has now played 523 senior games for the Bulldogs.