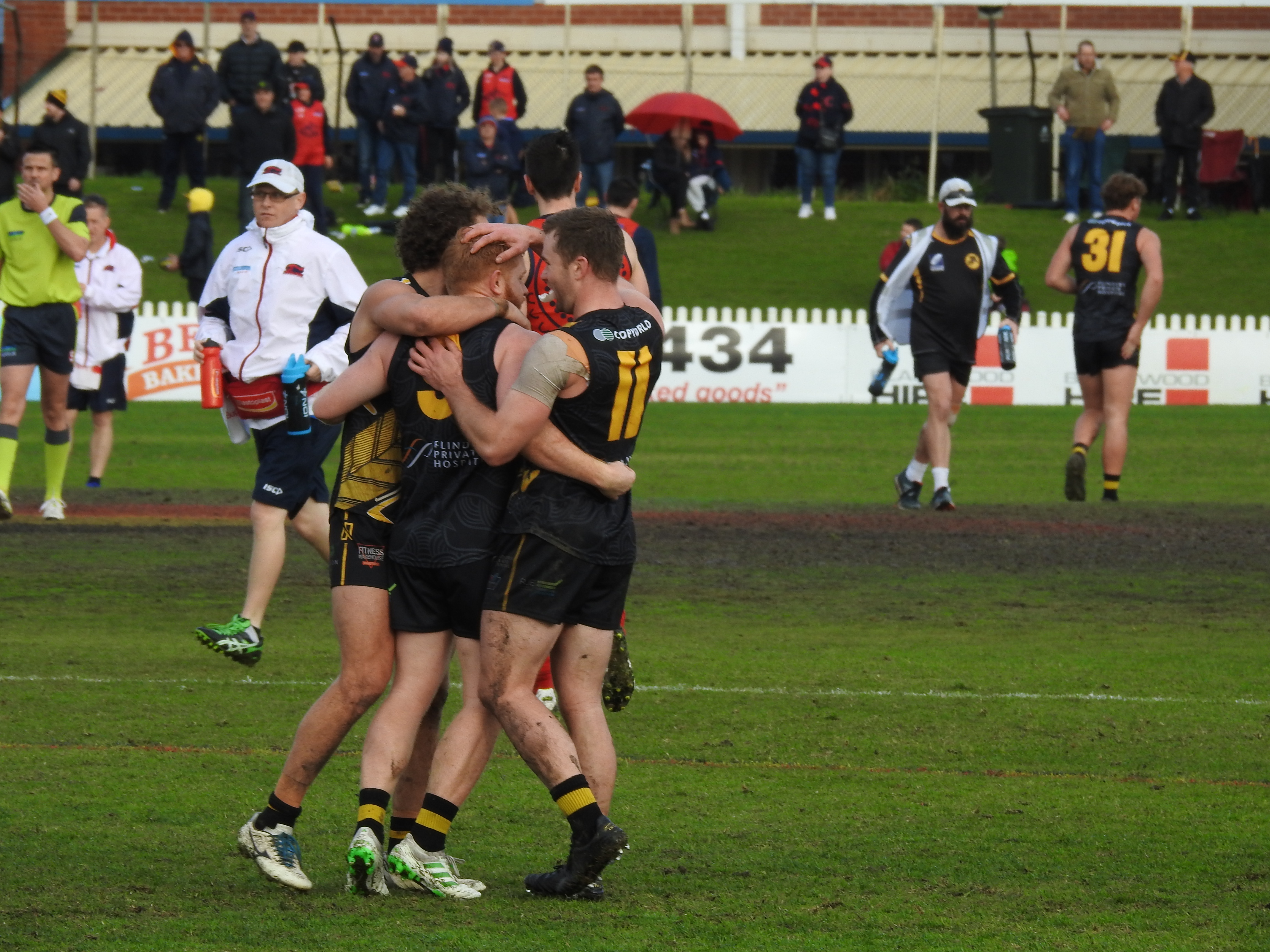 Glenelg rose to the top of the Statewide Super League ladder after slogging past Norwood with a 46-point win at ACH Group Stadium on Sunday.

Sending Adelaide into second place after its loss to Port on Saturday, the Tigers produced a strong, yet efficient, second half amid the slippery conditions at Brighton Road.

Leading by just a goal at half-time after a tight tussle with the Redlegs in the opening two quarters, Mark Stone’s men broke the game open with a six-goal third term to lead by 26 points at the final change.

And it was that man Liam McBean, now leading the race for the Ken Farmer Medal with 40 majors, who booted three of his four goals in the premiership stanza.

The third appeared to break the resolve of the Redlegs, who had been defending grimly during the latter stages of the term.

Norwood’s Cam Shenton got a decent fist onto the ball in a marking contest but instead of the ball being rushed over the goalline for a behind, it sat up nicely for McBean to soccer it off the ground from close range as the three-quarter time siren sounded.

Glenelg then finished off the game strongly with a four-goal final term in consistent drizzling rain, conceding just one goal to Redleg Anthony Wilson after a defensive error across half-back.

With Josh Scott still sidelined and Tim Sumner squeezed out of the side into the Reserves, the Bays got plenty of potency from second-year talent Brad Close, who proved to be an excellent foil for McBean.

The boy from Mount Gambier was particularly clean with his hands in the wet to boot four goals, including a classy left foot snap and a clever soccer goal for the first major of the game after 10 minutes.

Close – who had 25 possessions –  also produced two unselfish goal assists, one to McBean and another to Darcy Bailey, which otherwise would have resulted in him booting a game-high six majors.

Former captain Andrew Bradley and former Redleg Luke Partington thrived in the conditions for the Bays as they got in and under at the stoppages while also providing their team-mates with plenty of opportunities to finish with 62 disposals between them.

Current captain Chris Curran together with veterans Max Proud and Aaron Joseph were typically composed in defence for the Tigers, who had contributors across the ground.

This was evidenced by just two players – Matt Uebergang and Tom Schott – having fewer than 10 disposals, with the pair still having nine each.

Norwood wasn’t afforded an ideal preparation for the contest when premiership utility Ed Smart injured himself in the warm-up, forcing former Panther Cody Szust to play two matches in succession after lining up in the Reserves.

Szust finished with 23 disposals in the League match to surpass the 18 he collected in the seconds as he worked hard to make the most of his unlikely opportunity.

Redlegs midfielder Matthew Nunn continued to gather his form after another game under his belt in the wake of his hip injury, finishing with a team-high 27 disposals while Dom Barry had 24 against his former side as he tried to break the lines.

Promising Norwood teenager Cam Taheny produced another efficient display in attack as he returned from the AFL Under-18 National Championships to boot a team-high four goals from 15 disposals and five marks.