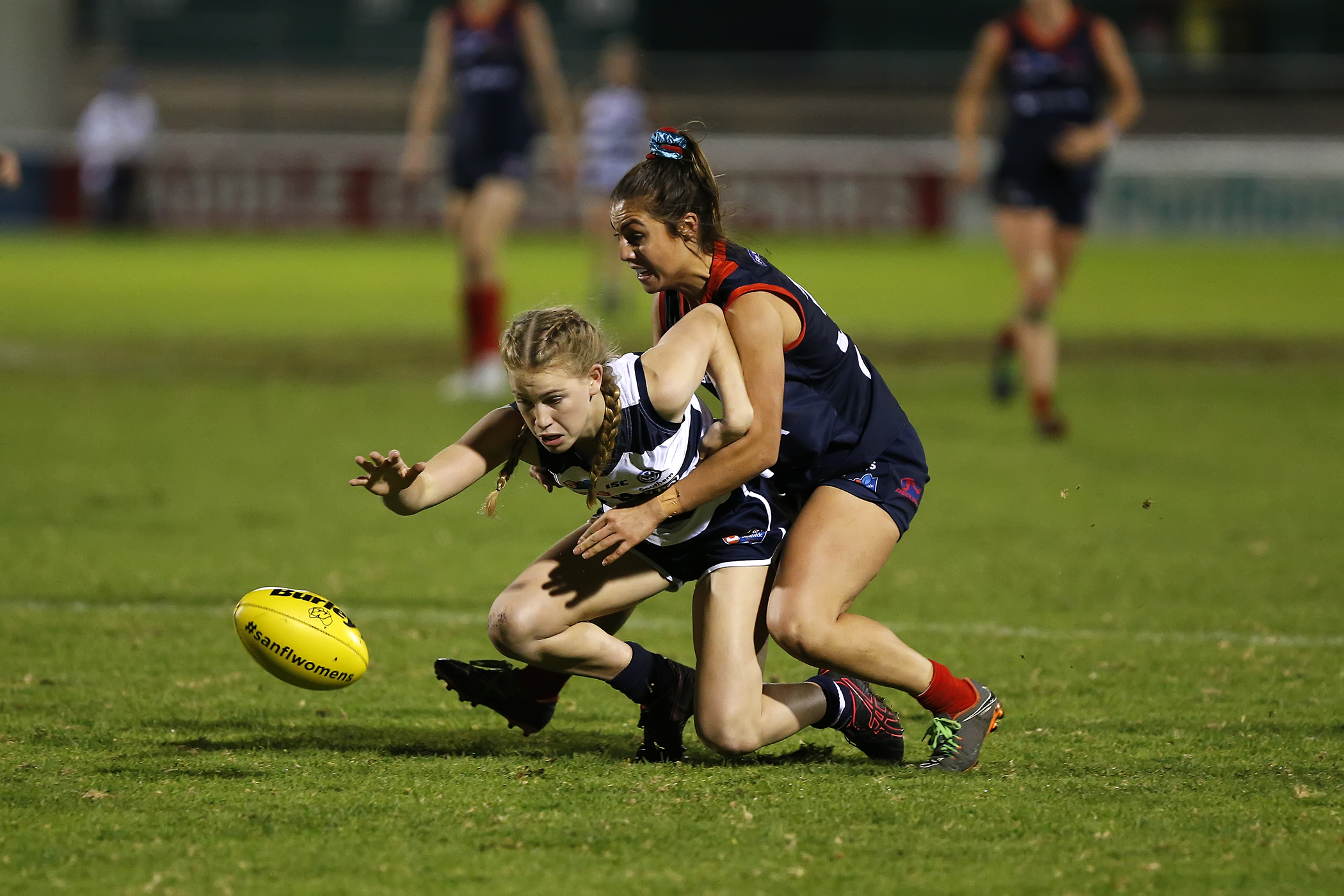 South Adelaide is on track to go back-to-back after beating Norwood by 13 points in the SANFL Women’s second semi-final on Friday night at The Parade.

And courageous North Adelaide stayed in the hunt for the flag, ending Glenelg’s fairytale rise from wooden spooner with a dramatic two-point first semi-final win, setting up a preliminary final clash with the Redlegs next weekend.

Reigning premier South advanced to Sunday week’s grand final thanks to a powerful opening and a fighting last quarter as Norwood, chasing its third successive appearance in the Statewide Super League premiership decider, had stormed back to within five points.

The Roosters earned a preliminary final place with a match-turning two goals in two minutes early in the final quarter of a tight, physical contest, having to overcome another stellar performance from Crows superstar Ebony Marinoff, who picked up a staggering 38 possessions for the Tigers.

After losing just one game in their debut season last year, the Panthers had to replace premiership coach Krissie Steen when she took up an assistant role with GWS. With Rick Watts taking charge they have hardly missed a beat, finishing the minor round second to Norwood with an 8-2 win-loss record before their semi-final win against the Legs, the team they beat by five points in last year’s grand final thriller.

The Panthers had suffered a setback to their semi-final hopes with a hamstring injury to Madison Bennett, their leading goalscorer for the season. But they hit hard early, their intensity and speed seemingly catching Norwood off guard. Nicole Campbell, who was to have a strong impact all night, booted a long bomb deep into attack in the opening minute, livewire Teah Charlton getting a toe-poke on the ball on the goal-line. After classy Nikki Gore added a behind, Charlton was in on the act again, claiming a strong mark at full forward and booting her second, South leading 2.1 to nothing within the first six minutes.

Norwood steadied, with superstar recruit Najwa Allen picking up nine possessions for the opening term, but it did not make the most of its chances, just adding two behinds. When Allen, who averaged a stunning 26 possessions per game in the minor round, was helped from the field in obvious discomfort early in the second quarter, the signs weren’t good for the Legs, who lost just one game in the home-and-away season – to the Panthers.

South took its chances, Campbell finding Tamara Page, who slotted a goal from 30m, then Charlton earning a holding-the-ball for a strong tackle and booting the ball into the danger zone, where Jess Kirk marked overhead and booted the Panthers’ fourth. When Allen came back on, her left knee strapped, the Legs were 24 points down but she soon pumped the ball into Norwood’s attack and Matilda Zander snapped a revitalising goal.

In the third quarter the momentum was all with Norwood as Allen hit the post, then Jane Fitzgerald marked strongly and found Kate Fenton, who goaled. Fenton was proving more than a handful and six minutes later she was at it again, snapping a team-lifting goal. Norwood had recorded nine inside-50s to South’s two for the quarter, it had clearly more possessions for the game (155-120) and looked on a roll.

But the Panthers simply weren’t going to let this game slip away. When it counted, they stood tall, not allowing the Legs a score in the final quarter, Tiffany Copley soccering through the only goal for the term after a typically desperate smother from Elyse Haussen.

The North-Glenelg first semi-final was a heartstopping battle between two in-form sides, the Roosters having won six games in succession to end the minor round with a 7-3 win-loss record, while the Bays had snatched the last finals place at the expense of West Adelaide by winning their last three home-and-away games and finishing on 6-4.

The Bays had finished bottom in 2018 and had won just one of their previous 12 games before this season. But they immediately announced their arrival with impressive wins in their first three games – the Round 3 victory their first success against North, by 15 points.

And the Roosters also had dual Crows premiership star Ebony Marinoff to worry about. The two-time All-Australian had made her debut with the Tigers in Round 9 and picked up 35 possessions against Sturt then followed up with 36 against the Eagles as Glenelg stitched up as finals spot.

Incredibly, Marinoff had an even bigger game in the semi-final, earning 38 touches against North. But the Roosters refused to be beaten.

They made the early running when, after four minutes, Emma Sampson found Kelly Barltrop, the SANFL Women’s record goalscorer for the season, on the lead. It was hardly a surprise she slotted the opening goal.

North attacked hard but Marinoff turned the Roosters away with some quality defensive work – she recorded a remarkable 11 kicks in the first quarter – but the odds were overwhelming and Leah Tynan snapped North’s second goal after 11 minutes.

Glenelg started to work its way into the contest and after two behinds Lucy Armitage looked to have broken the Tigers’ drought in the 16th minute with a sensational snap from the pocket but the ball hit the post. Barltrop started the second quarter with a great snap at goal but her shot also hit the post before Glenelg locked the ball in its forward-50, collecting another two behinds to be a wasteful 0.5 to North’s 2.1. But Ellen Fauser, the Tigers’ leading goalscorer for the minor round with nine, snared a strong, juggling contested mark and converted from an angle and it was game on. Both teams had their chances as the clash stepped up a level but it was the Tigers who went into the main break on a high after they charged out of defence for pacy Samantha Franson to find Melinda Speechley on her own in the goalsquare.

The pressure stepped up further in the third quarter as the game became a real arm wrestle, Glenelg dominating the inside-50s 9-2 for the term but neither side being able to break the deadlock. Marinoff was up to 30 disposals by the final break and the Bays would have liked their chances. But in three minutes early in the final quarter two Roosters superstars turned the game on its head. GWS Giant Brittany Perry found Cristie Castle in the forward-50 then showed her heart and strong work ethic as she sprinted on to get the ball back, slotting a crucial goal that edged the Roosters back in front. Just two minutes later Lauren Daniel capped her outstanding game by finding Barltrop, who kicked what proved the matchwinner.

Glenelg refused to concede and the crowd was at fever pitch when Tasja Batzavalis booted the goal of the night under intense pressure with a snap from an angle that miraculously bounced through the big sticks. The Bays kept coming and Marinoff lifted her stats to an incredible 31 kicks, nine marks, nine tackles and eight clearances but still the Roosters refused to buckle, Sampson and Perry making desperate and crucial late tackles to keep their finals campaign well-and-truly alive.