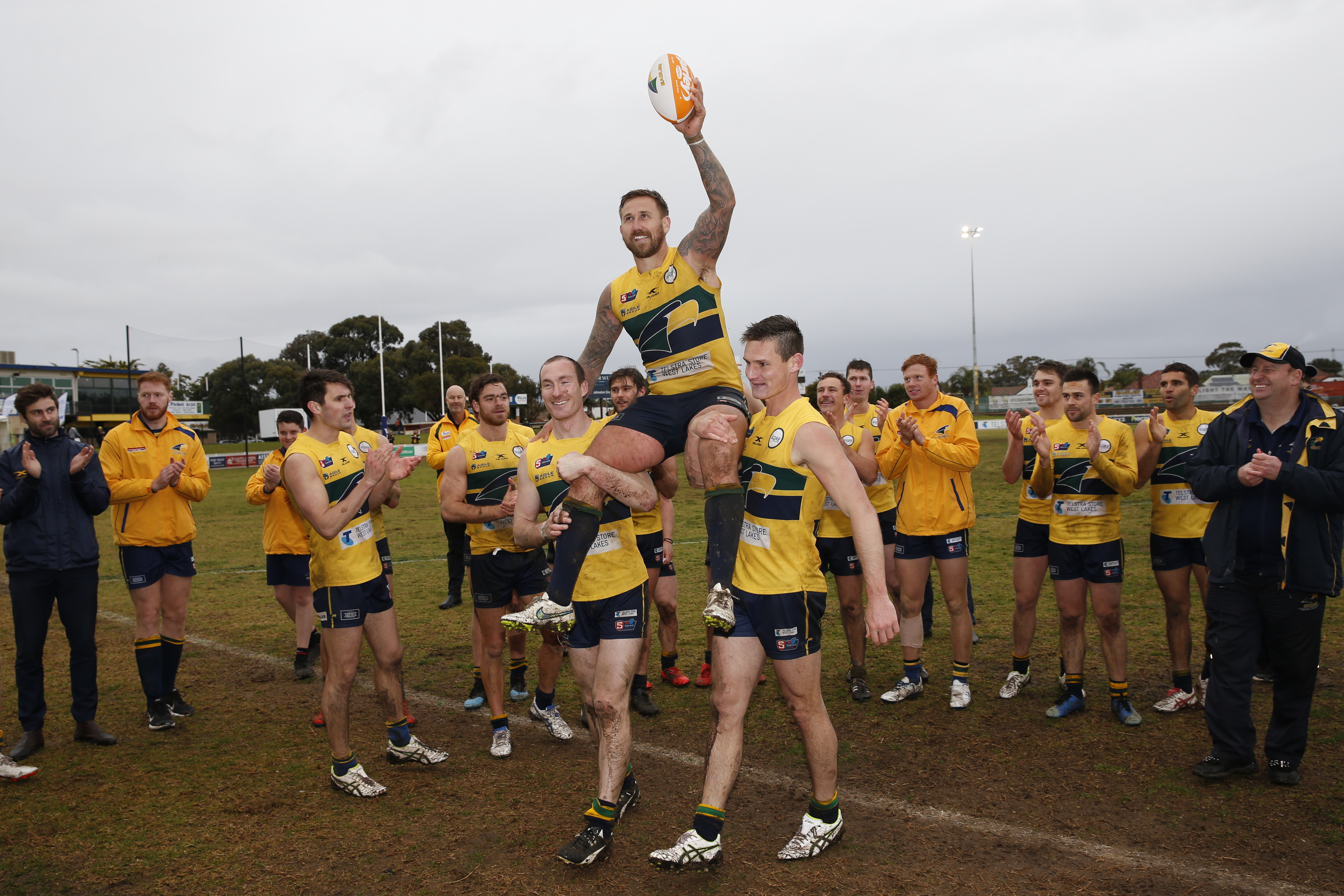 Still stinging after showing little resistance to Port Adelaide with their season on the line in Round 16, the Eagles displayed the spirit which has seen it become a regular finals contender in the past decade.

And while the major round is not in the equation this year, the hosts put their pride on the line as Lewis (pictured above) lined up for the final time in the No.33 guernsey at Oval Avenue.

With two talls – ruckman Jordan West and forward Jake Weidemann sidelined for most of the second half – the Eagles dug deep in the treacherous conditions to topple the top-three bound Crows.

West’s absence forced key forward Jack Hayes into the ruck for much of the match, with the flexible bigman thriving as an extra midfielder with the ball on the ground regularly.

Hayes – who finished with 19 disposals, nine marks, 11 tackles and 24 hitouts – engineered his team’s first goal of the day by chipping the ball over the top to Jesse Lonergan who was alone in the goal square.

The Eagles began to make their move during the second term as they held the Crows to just one behind.

Clever goal sneak James Rowe swooped on a loose ball, found space for himself and snapped truly on the left foot from 30m to give his side a 14-point break nearing half-time.

Both teams traded blows to begin the third quarter, with Adelaide’s Hugh Greenwood showing off his class with a nice sidestep and finish on the run from 30m out in front of goal.

But this was soon cancelled out when the Eagles produced arguably the cleanest passage of play in the wet to kick a significant goal 23 minutes into the third term.

With the ball at half-forward, Nick Moore gathered and fired out a quick handball to Jordan Foote, who let fly with a bouncing ball from 45m as Rowe did some handy shepherding on the goalline.

The 16-point margin at three-quarter time proved to be enough despite Crow Rory Atkins kicking the only goal of the fourth term with a snap from the top of the goal square.

Small men James Boyd and Matt Goldsworthy made the most of the weather to be the Eagles’ leading disposal winners while Foote and Jared Petrenko were skillful in the mud.

Lewis was also a valuable contributor in game number 205 tallying 18 disposals, eight tackles and six clearances before being chaired from the ground after the final siren.

Adelaide skipper Matt Wright stepped up to have arguably his best game of the season with 34 disposals while Atkins chalked up 27 possessions, eight tackles and seven clearances in his first SANFL game of the season.

Greenwood was solid in the clinches with 15 tackles to go with his 20 disposals and a goal while defender Alex Keath played a goal-keeper style role down back to tally 16 disposals and eight marks in his return from an ankle injury.

Despite the loss, Adelaide secured a top three berth when Port Adelaide defeated Sturt on Sunday and Central defeated Norwood on Friday night.

Port Adelaide earned a finals double chance after holding off a desperate Sturt by 15 points at Peter Motley Oval.

Needing a victory to bank a vital top-three finish, the Magpies’ took control of the scrappy affair within a match-defining period either side of the quarter-time break.

Sturt’s reliable defender Jack Stephens struck within the opening two minutes when his courage was rewarded with a 25m penatly after taking a gutsy mark.

The Jack Oatey Medallist converted from 40m to give his side an early injection of confidence, only to see the visitors quickly erode this advantage through the mercurial Steven Motlop.

Coming off a five-goal haul against the Eagles in Round 16, Motlop soon doubled his tally to give his side the lead less then 10 minutes from the opening bounce.

Port then put the squeeze on the Double Blues in the critical patch, with West Coast premiership ruckman Scott Lycett converting a chest mark from a long inside 50m entry courtesy of Magpie team-mate Jack Strange.

And when the elusive Aidyn Johnson made the most of an errant Sturt defensive pass across half-back, he pounced on the loose ball to kick a goal on the run from 35m early in the second term.

Port’s lead extended to a significant 29 points on the back of a major to Billy Frampton, with the contest seemingly over before half-time due to the driving rain and wind at Oxford Terrace.

But Sturt premiership pair Steven Slimming and Mark Evans kicked a pair of goals to give their side a pulse with the margin trimmed to just 16 at the main change.

Just one goal was kicked in the third quarter, when former Magpie Sam Colquhoun read the ball beautifully off a stoppage, curled around the pack and goaled on the run from 40m.

Sturt managed to stay within two goals of the Pies until time-on of the final term as they continually attacked their goalmouth with a 54-46 inside 50m advantage.

It was to no avail as former Brisbane Lion Sam Mayes was awarded a free kick 35m and after he converted for Port, the chance of a Sturt comeback had been snuffed out entering time-on of the fourth quarter.

Former Double Blue Jack Trengove thrived at his old stomping ground at Unley, racking up a game-high 28 disposals and nine tackles for the Magpies, who also had strong contributions from Willem Drew (32 disposals, 11 tackles and eight clearances) and Mayes.

Ruckman Lycett also did his chances of a recall no harm by tallying 18 disposals, seven tackles, seven clearances and 43 hitouts to go with his goal on a day not suited to giants.

Sturt skipper Zane Kirkwood wan’t afraid to get in and under for his 23 possessions and six clearances while Stephens and Fraser Evans held up the Double Blues defence impressively while having 43 touches between them.

But the loss leaves Sturt vulnerable heading into its final minor round contest against Glenelg next Saturday, needing a win against the Tigers to ensure an Elimination Final berth.

If the Double Blues lose to the Bays, then South Adelaide can jump into the major round with a victory against Adelaide at Noarlunga.

Panthers have a pulse

South Adelaide’s season has a pulse after the Panthers produced an outstanding 79-point win against North Adelaide at Flinders University Stadium.

After banking the premiership points and gaining some valuable percentage with the powerful performance, the Panthers can now sneak into the top five if results fall their way in Round 18.

Firstly, Jarrad Wright’s men must beat Adelaide at Noarlunga next Saturday and hope either or both of Sturt loses to Glenelg and Norwood succumbs to West Adelaide.

If form is anything to go by, South will take care of its part of the equation next weekend after dispatching of the Roosters in clinical fashion.

After kicking the first 11 goals of the match, the Panthers had established a 67-point lead by the time North spearhead Alex Barns booted his team’s first goal of the game nearly 24 minutes into the third quarter.

With strong defence being a catalyst through the aid of Joseph Haines, who had a team high 31 disposals, the Panthers continued to unearth the next wave of Navy Blue talent while also keeping their 2019 campaign alive.

Tall utility Jesse McKinnon, the son of West Adelaide great Robbie McKinnon, had a breakout performance to finish with 21 disposals, six clearances and three goals while also feeding his co-captain Joel Cross with a goal assist in the second term.

The Victor Harbor product was joined on the scoreboard by a fellow local recruit in Meadows forward Eamon Wilkinson, who kicked three majors in his second game of Statewide Super League football.

The second of which was a long range shot which just dribbled across the line as the three-quarter time siren sounded with the Panthers in front by a mammoth 68 points.

Big-bodied midfielder Abe Davis continued his habit of hitting the goal scorers list with a trio of majors while another youngster in Reece Milsom continued his development with 19 possessions.

Most heartening for the future is that South won in such convincing fashion with Cross and Nick Liddle only having 23 disposals and one goal between them.

Reigning premier North had Aidan Tropiano rack up 28 disposals, 12 tackles and 13 clearances as he tried his heart out while vice-captain Alex Spina, Campbell Combe and Tom Schwarz were serviceable for the visitors.

To avoid the wooden spoon, the Roosters must now beat the Eagles in Round 18 at Prospect Oval while also relying on Norwood beating West Adelaide at The Parade.