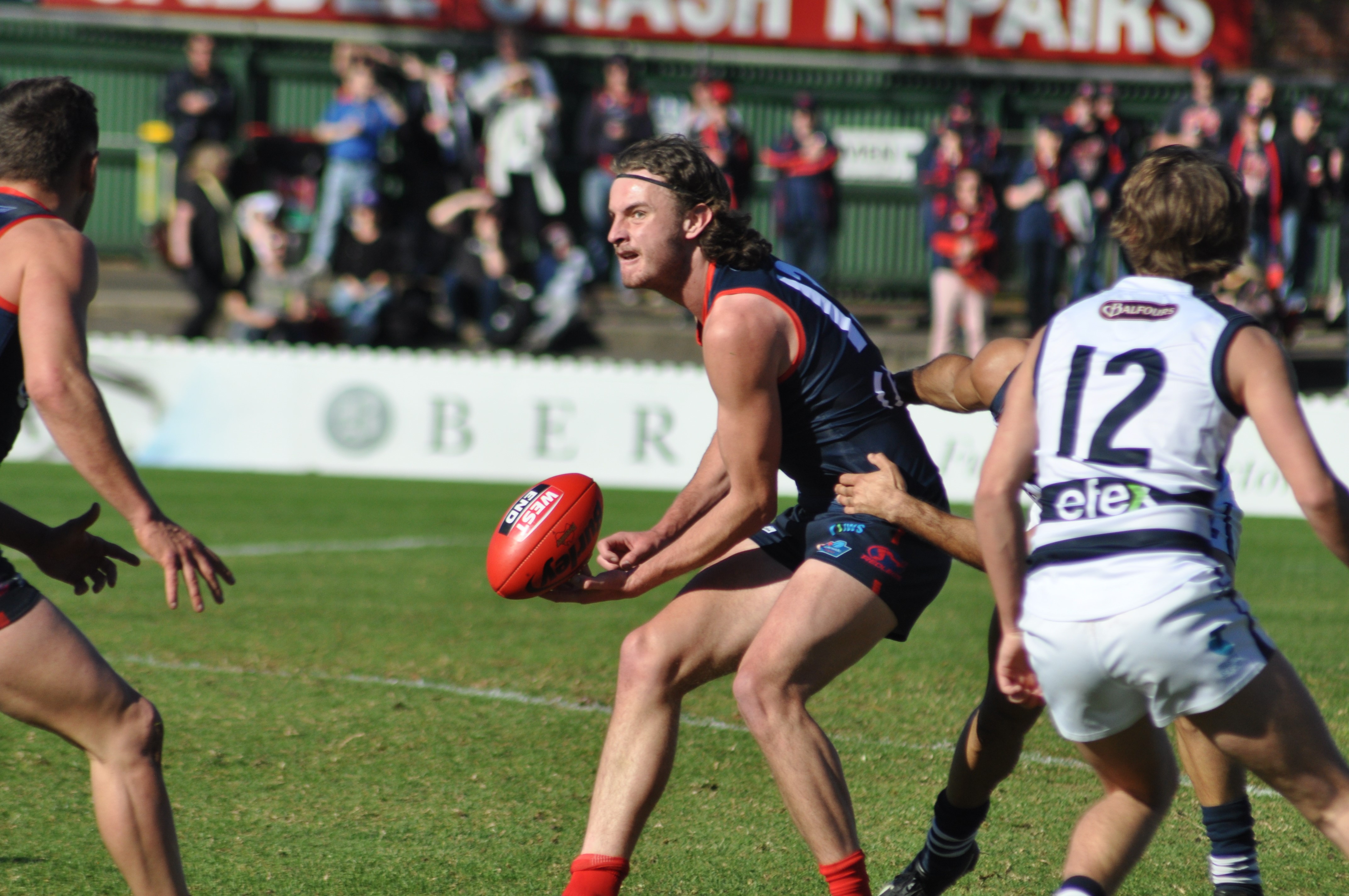 Norwood has stormed back into the top five – for at least 24 hours – after running over the top of South Adelaide by 45 points at The Parade.

The Redlegs snatched fifth-place from the Panthers with a commanding fourth quarter performance which yielded seven goals to one kicking with the aid of a strong breeze to the southern end of Woods Street.

Leading by just seven points at the final change after a tight tussle for the opening three terms, the hosts put the afterburners on in a confidence-boosting display having lost their past four matches in succession.

In fact, Norwood’s last victory was against the Panthers on the Queen’s Birthday Holiday Monday as it held on for a two-point triumph in Brady Dawe’s 200th match.

And it was Dawe who got things moving in the final term on Saturday, as he helped create his team’s first goal after three-quarter time.

As South co-captain Joel Cross tried to bring the ball back into play quickly after a behind, Dawe placed just enough body contact on the Magarey Medallist to ensure his errant foot pass would dribble out of bounds.

From the ensuing free kick, classy Declan Hamilton nailed his set shot from the boundary line to give his side a 15-point break two minutes into the fourth quarter.

Within 60 seconds, Norwood midfielder Matthew Nunn had stretched the margin to 21 when he streaked out of the centre square to take a bounce and goal on the run from 40m.

It sparked a match-winning run for Jarrod Cotton’s charges as they then piled on five of the next six goals to finish the game in control.

Nunn was tremendous in booting four goals for the match – three before half-time – while also finishing with 27 disposals and nine tackles.

Lewis Johnston and Matthew Panos also significantly lifted their outputs after having quiet games against Glenelg in Round 13.

Norwood’s RAA Rookie Cameron Ball – pictured above – did an excellent Kieran McGuinness impersonation as he collected 15 disposals and six marks in an encouraging debut.

RAA Rookie Reece Milsom finished with 11 disposals and four tackles in his first League game for the Panthers, who are now in desperate need of a victory against Port at home in Round 15.

North Adelaide caused one of the upsets of the season when it trumped Adelaide by 26 points at Prospect Oval.

Sitting at the foot of the Statewide Super League ladder, the Roosters produced their best football against one of the competition’s genuine contenders, capped off by a gutsy last quarter display into the wind.

After getting the jump on the Crows in the first quarter after keeping the visitors without a goal until a minute into the second stanza, North were determined to hold firm in the knowledge a comeback was on the cards.

Adelaide captain Matt Wright – a North junior product – got his team within three points when he kicked truly 23 minutes into the third quarter.

But then North forward Mitch Harvey converted his set shot from 40m out after a clever foot pass from Lewis Hender landed in his lap.

North’s 10-point three-quarter time advantage didn’t seem enough given the Crows had a strong breeze in the final term but the hosts were able to soak up valuable time by not allowing a goal until Rooster Billy Laurie kicked a major in the 16th minute.

Laurie’s set shot from a tight angle 30m out was a beauty and when it was followed up soon after by best afield Hender kicking his fourth in the 19th minute, there was finally plenty to Crow about for the Roosters’ faithful.

Hender not only hit the scoreboard himself but was particularly creative for his team-mates as he finished with 21 disposals and six marks to go with his six scoring shots.

Leadership duo Alex Spina and Max Thring combined for 63 disposals in the middle while Sandover Medallist Aidan Tropiano had 31 including the all-important kick to set up Laurie for his defining major in the fourth term.

Former North captain Mitch Clisby made a welcome return from a hamstring strain to have 28 disposals and eight marks while Tom Schwarz’s 28 touches were equally damaging.

Adelaide – which lost promising development player Hamish Latchford to injury early in the second term – had Pat Wilson register 32 possessions and a goal as he shrugged off any concussion concerns from the heavy bump he suffered in Round 13.

Crows veterans Bryce Gibbs, Richard Douglas and Sam Jacobs had their moments but ultimately it was a very disappointing effort from a side entrenched in the top three.