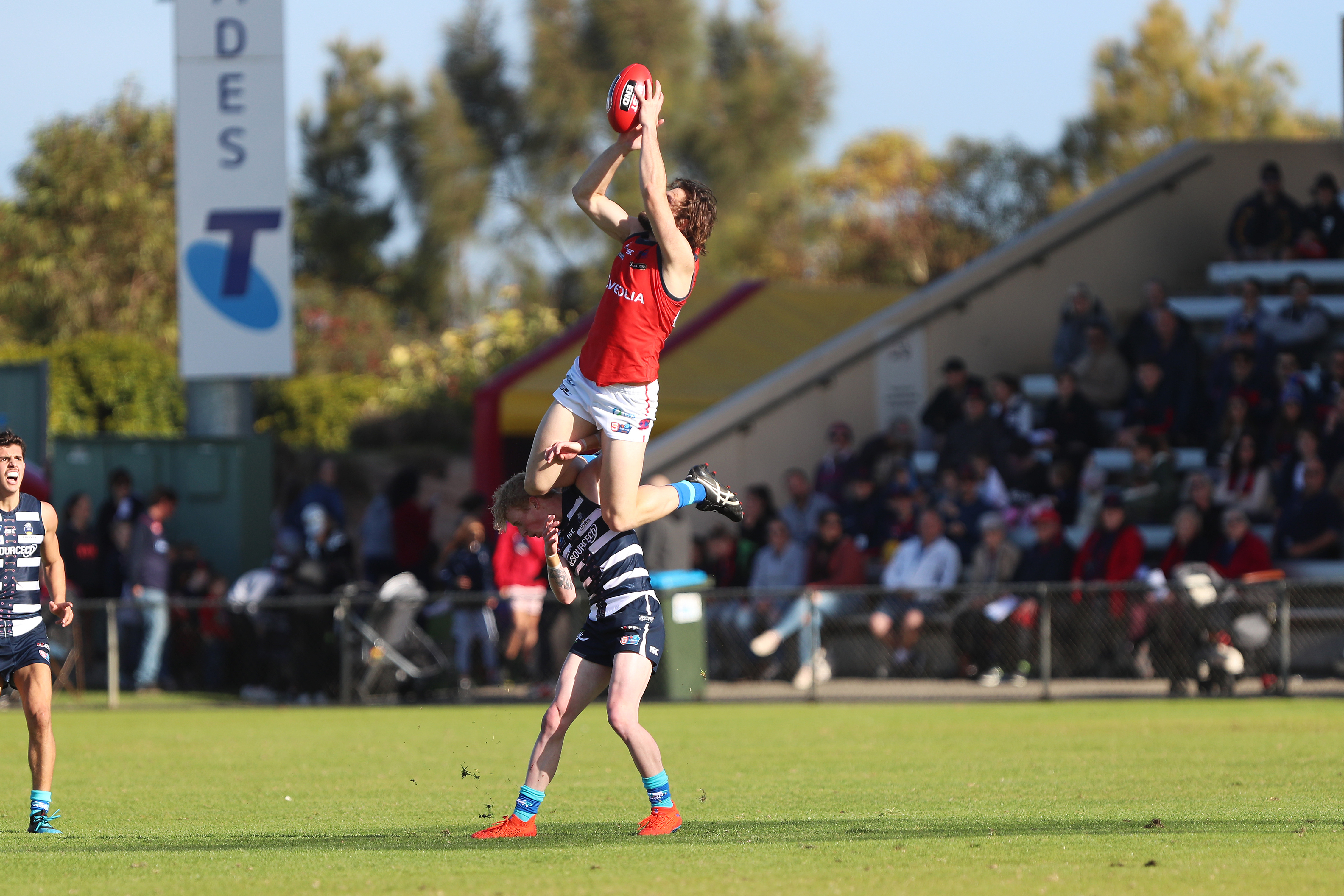 Norwood managed to hold off a fast-finishing South Adelaide by just two points as it continued its penchant for winning close games at Flinders University Stadium on Monday.

Despite losing captain Jace Bode (ankle), Magarey Medallist Mitch Grigg (back spasms) and premiership utility Ed Smart (hamstring) to injury as they kicked into the wind in the final term, the Redlegs earned their fourth victory by less than 10 points for the season.

A commanding seven-goal third quarter set up the victory for the visitors, who went into the final change with a handy 15-point break as they surged to honour 200-game milestone man Brady Dawe.

But whether it would be enough was in question, given the Panthers had at least two more fit players and the breeze at their back heading toward the southern end in the fourth term.

Scoring the opening two goals of the quarter helped matters for the Redlegs, as Lewis Johnston – who had 30 disposals and took 13 marks – booted his second for the day from outside 50m.

Then Peter Bampton completed a clever back-handed slap of the ball while holding off his opponent for team-mate Anthony Wilson to run into an open goal square for a 26-point lead eight minutes into the last stanza.

The margin proved to be just enough as South – spurred on by inspiring co-captain Joel Cross – refused to lie down as they kicked the final four goals of the contest.

Cross, who finished with 33 disposals and 4.2, closed the gap to just seven points when he accepted a Malcolm Karpany handball at the top of the goal square to burst through and kick truly.

After Bampton soaked up vital seconds before missing his set shot from 45m out at the other end, South’s Ben Heaslip brought the Panthers’ faithful to life when the gap closed to just two points after he goaled 26 minutes into the final term.

With the ball bobbling in and out of South’s forward 50m during the final two minutes, it was Norwood’s Brad McKenzie who took two vital marks while Panther Abe Davis continued to put the ball into his team’s attacking zone.

And it was upon Davis’ final foray forward the final siren sounded, much to the relief of Norwood’s players and supporters who were on the edge of their seats.

Johnston, Grigg – who had 21 touches and kicked two goals before leaving the field midway through the third term – and McKenzie were all strong contributors while RAA Rookie Brodie Carroll had some nice moments on his wing in his first game.

Norwood’s Mr Fixit Cam Shenton – who took an outstanding mark in the first term pictured above – was vitally important attacking in the first half before helping cover Bode’s absence in defence after the main break.

Dawe was fittingly chaired off the ground after the game in front of a gracious guard of honour from the Panthers, with the Redlegs’ No.30 earning a noticeable cheer from his Meadows FC support group after a courageous mark in the fourth quarter.

Cross was the best player on the field in a losing side as he tried to will his side across the line while Nick Liddle and Abe Davis were also constructive in the midfield.

Joe Haines played with ferocity in defence while the forced selection to play Alex Cailotto in the ruck paid off for South coach Jarrad Wright.

With raw ruckman Cam McGree a late withdrawal with a hip injury, Cailotto rucked for the majority of the afternoon before finishing with 31 disposals, five marks and 12 clearances to impose himself on the match around the ground.

Glenelg in the Groove

Holding North to just one goal during the premiership stanza, the Tigers stretched the margin to a game-high 68 points 10 minutes into the final term when Tim Sumner booted his side’s ninth goal in succession.

But the foot came off the pedal for the remainder of the match as the Roosters restored some respect into the scoreboard by booting the final four majors of the game while the heat was out of the contest.

Sitting at the top of the table with a 7-1-1 win-loss-draw record, Mark Stone’s men led all the major stat categories, having 50 more kicks, 24 more handballs and 25 more marks which translated into 18 more inside 50m entries.

Snook, who made his debut for the Tigers back in Round 21 of 2011, finished with 28 disposals and six clearances to be just overshadowed by midfield mate Luke Partington, who won the Dean Higgins Medal for his 35 disposals, seven tackles and five clearances.

The Bays’ forward line continued to function even in the absence of leading goal kicker Lachie Hosie, who was claimed by North Melbourne in the AFL mid-season draft.

Liam McBean led the way with five majors while Luke Reynolds kicked two as well as Sumner while Josh Scott, playing his first League game since breaking his arm in Round 3, chimed in with two goals of his own.

Experienced Bays defenders Chris Curran, Max Proud and Aaron Joesph were reliable in defence yet again while Matthew Uebergang played his first League game for the season after a knee injury to finish with 18 disposals.

Still with just the one victory for the season, North had Jarred Allmond work hard for a team-high 35 disposals while Maris Olekalns returned to the line-up to chalk up 24 touches and a goal.

Forward Keenan Ramsey found more the ball than usual to tally 19 possessions and two goals for the Roosters, who had six players register less than 10 disposals for the match.