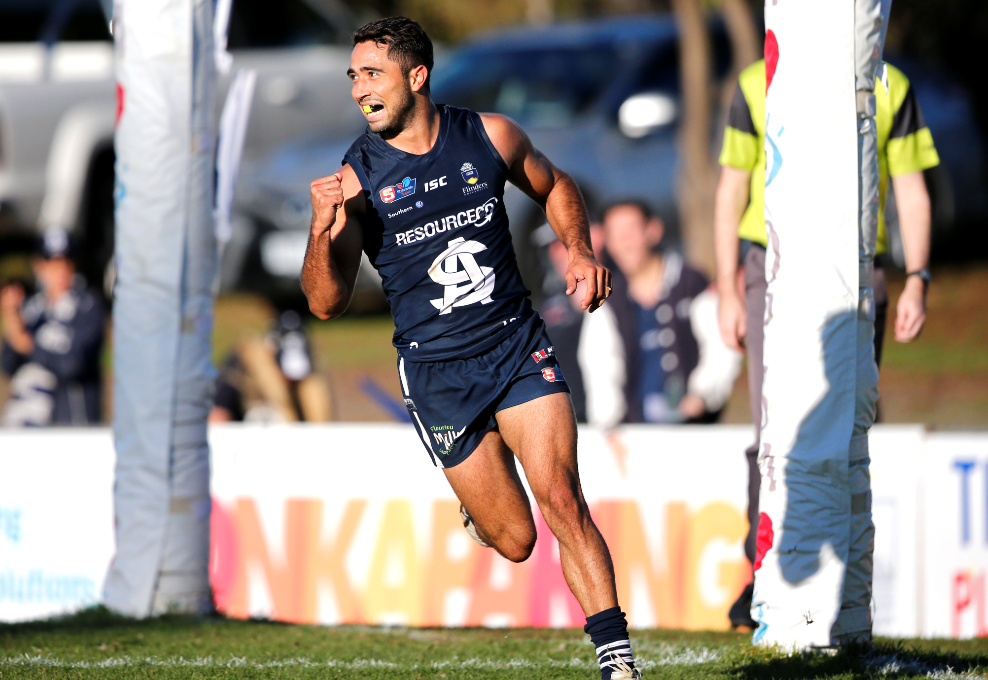 South Adelaide needed a last minute hero and the Panthers got it in the form of reliable defender Joe Haines.

Clinging on to a five-point lead against Glenelg at Flinders University Stadium, South was desperately trying to close out another nail-biter after falling to Norwood by two points six days earlier.

Panthers co-captain Joel Cross had just kicked a vital fourth-term goal and had a hand in another to veteran team-mate Nick Liddle which seemingly had the hosts across the line with a 10-point buffer 22 minutes in.

But within 60 seconds, the Bays had a quick reply after Liam McBean gathered a ground ball and goaled on the run from 40m in front.

With the Tigers continuing to surge as they attempted to wrestle back the lead, it was the resolute Haines who stood tall.

A long-ranging inside 50m entry was headed toward McBean who was within kicking range, but Haines flew across the front of the pack to take a strong contested mark with less than a minute on the clock.

Jarrad Wright’s charges were then able to maintain possession and move the ball out of the danger area until the final siren sounded much to the delight of the blue-and-white faithful.

It was yet another entertaining, highly-skilled contest at Noarlunga but this time the home side was on the right end of the result.

Making his Statewide Super League season debut after a serious hamstring strain, Panther Anthony Biemans made his presence felt with three second-quarter goals as his side worked its way back into the match.

Crafty Kyle Emery also chimed in with three goals for South as the hosts went toe-to-toe with the Tigers’ talented forward line.

Coming into the clash as the competition’s pacesetter, Glenelg started strongly in the first term to open up a 20-point lead nine minutes into the second stanza.

Luke Partington again found plenty of the ball for the visitors while the 100-game milestone man in Marlon Motlop also contributed strongly with 18 touches and a goal.

The Tigers will now look to regroup ahead of hosting Central District in Round 11 next Sunday.

Port Adelaide overran a gallant Norwood outfit with a powerful final term to earn a 45-point win at Alberton Oval.

Fielding an exceptionally strong SANFL line-up which included Power regulars Ollie Wines, Charlie Dixon and Brad Ebert, the Magpies were facing a challenge when the Redlegs booted two of the first three goals of the final term.

When Norwood’s Cody Szust streamed through centre half-forward to find Peter Bampton at the top of the goal square, Bampton trimmed the margin with his set shot to just 12 points in the ninth minute of the fourth quarter.

Unfortunately for the throng of red and blue fans who flocked to enemy territory, that would be the final goal kicked for Jarrod Cotton’s outfit, which then ran out of steam as Port banged on the last five majors of the match.

And it was Wines, Dixon and Ebert who were all well and truly in the thick of the match-defining onslaught.

Wines snapped truly at the top of the goal square to add a major to his impressive stat column of 38 disposals, seven marks and eight clearances.

Then Ebert, returning from a three-week absence due to concussion, chalked up two goal assists as he laced out Sam Hayes and Tobin Cox to help the Magpies kick the next two goals en route to stretching the buffer to 24 points.

Not to be outdone, Dixon then booted two of his three majors in the dying stages as he brushed his opponent Michael Talia aside to take a strong contested mark for the first.

The former Gold Coast Sun then converted a bursting mark on the lead before heading to the interchange bench where he received a rousing ovation from the Port Adelaide faithful.

Magpies captain Cam Sutcliffe, now upgraded to the senior list after the AFL’s Mid-Season Draft, booted four goals to go with his 19 disposals as he pushes his claim for an AFL elevation.

Magarey Medallist Mitch Grigg, who battled back spasms six days earlier, collected 22 touches and 10 clearances while Dom Barry had 21 possessions and a goal in his return to Alberton after spending last year on the Power’s senior list.

Sturt strangles North in second half

Seeking to return to the winners list after being beaten by Port Adelaide in Round 9, the Double Blues made life difficult for themselves after a patchy opening half.

Trailing by 11 points at the main break, the visitors then produced an impressive defensive shut down of the Roosters as they ensured the hosts wouldn’t register a goal in the second half.

Ben Jarman’s set shot from 25m out directly in front 27 minutes into the second stanza was to be North’s final goal of the game as Sturt then established a two-goal advantage by three quarter-time.

Double Blues premiership forward Josh Hone was a key instigator of the revival as he booted the final goal of the third term and the final quarter to finish with a match-defining bag of four in a low-scoring contest.

Hard-running Sam Colquhoun, who had a team-high 31 touches and two goals, captain Zane Kirkwood and James Battersby – who had two goals with his 24 possessions – also played pivotal roles in the triumph.

Veteran Danyle Pearce found more of the ball to tally 26 disposals while West End State captain Jack Stephens mopped up in defence for Sturt with 15 marks and 23 disposals.

North coach Josh Carr last week admitted to having one eye on next year’s campaign which would have left him encouraged by the debut of Mason Neagle, who collected 28 possessions and 11 marks.