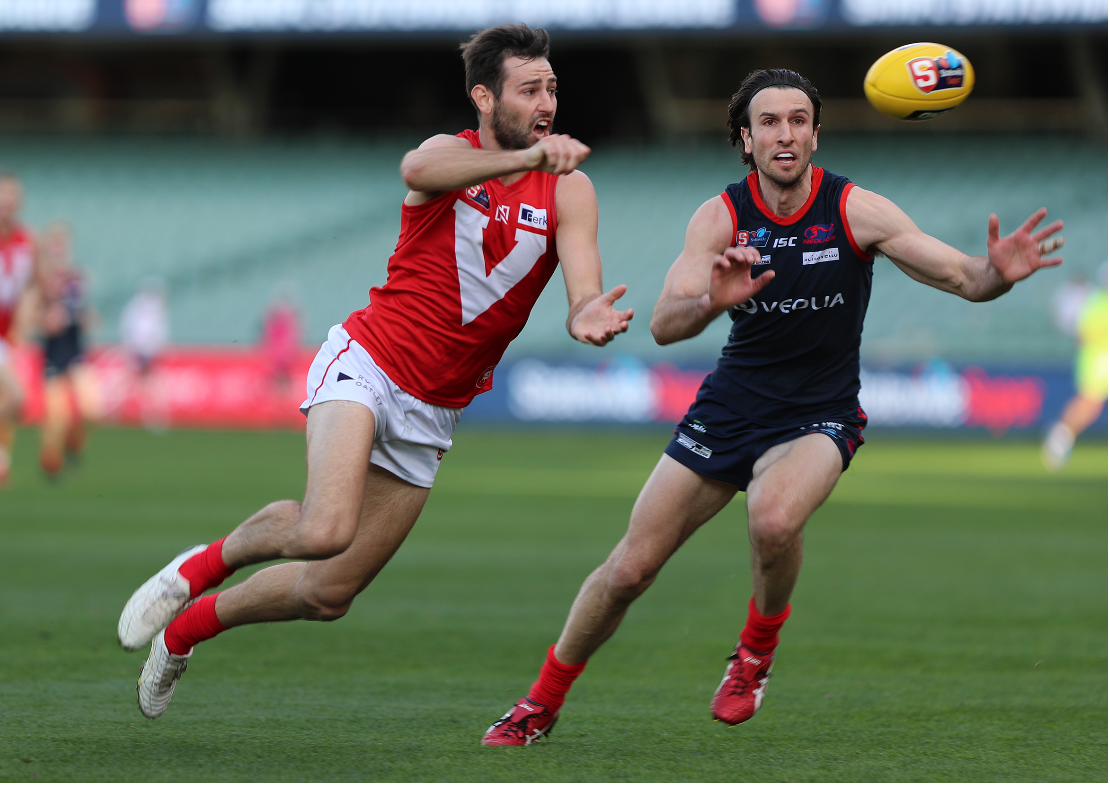 North Adelaide overcame a slow start to cling on for a thrilling two-point win against a gutsy Norwood in the second game of a Round 2 double-header at Adelaide Oval.

Despite failing to score in the first term, the Roosters – without ruck inclusion Alex Barns (concussion) for the majority of the match – hung tough to edge their way in front during the middle quarters.

It led to Jacob Surjan’s charges earning an eight-point break at the final change as they attempted to wear down the brave Redlegs, who were two men down for the entire second half after ankle injuries suffered by Cole Gerloff and Nick Pedro.

The physically spent Legs defied the odds in the early part of the fourth term, kicking the opening two goals as captain Matt Panos and developing utility Josh Richards finished with poise.

Panos gleefully accepted a hand off from Will Abbott to goal on the run from 45m while Richards made the most of a 25m penalty after catching North recruit Billy Hartung holding-the-ball.

Norwood’s lead could have been extended to 11 points when Matthew Nunn (28 disposals, five tackles, five clearances) fired from 30m on a slight angle but the star midfielder frustrated himself when his shot sailed right for a behind.

Instead, Jarrod Cotton’s men led by one straight kick until speedy North forward Kym LeBois turned on his after-burners to soccer through a magical goal nearly 16 minutes into the fourth quarter.

Fellow forward Keenan Ramsey soccered the ball into the former Carlton rookie’s path to let him do the rest as it wobbled through to tie up the scores.

Lewis Hender – North’s star with seven goals in Round 1 – attempted to kick his second of the evening but missed his set shot as Ramsey put the margin out to two in the 26th minute as his snap shot just bounced through for a behind.

Coming off a nail-biting three-point loss to Glenelg, the Redlegs refused to go away but just as they mounted a serious attack through the centre square, the final siren sounded with North in front where it counts – the scoreboard.

It will come as cold comfort to Cotton that Norwood had more scoring shots, disposals, tackles, clearances, inside 50s and marks (31 more) yet failed to bank the premiership points for the second week in succession.

He won’t be able to question the endeavour of his players, who were forced to dig deep when Gerloff left the ground on a stretcher 10 minutes into the second term.

Declan Hamilton was enjoying one of his best games for the club in the first half before tallying 27 disposals, nine marks and a goal while Nunn and Zac Richards had close to 60 disposals between them.

After comfortably defeating the Bloods in Round 1, North showed plenty of ticker to initially drag itself back into the game before pinching the lead midway through the final term.

Roosters midfielder Campbell Combe racked up 29 disposals, 14 tackles and six clearances while captain Alex Spina and his deputies Tom Schwarz and Andrew Moore won plenty of contested ball on the inside while throwing their bodies into the fray.

Schwarz took a courageous mark in front of oncoming traffic late in the third term while Moore and Spina had 10 tackles between them.

Classy North goalsneak Frank Szekely kicked an eye-catching checkside goal on the run in the second term while Mitch Harvey was a major influence in turning the game back in his team’s favour with consecutive goals in the third quarter.

The result will give the Roosters plenty of belief as they prepare for their challenging contest against Glenelg at ACH Group Stadium next Saturday.

Woodville-West Torrens coach Jade Sheedy poured his heart and soul into the Sturt Football Club for more than a decade.

But the Double Blues’ Magarey Medallist and premiership midfielder was yesterday helping to inflict pain on his former club after guiding his Eagles to a commanding 51-point win in the first game of a double-header at Adelaide Oval.

Sheedy, a former Sturt captain who played 255 games and won four best-and-fairests at Unley, must have drawn great satisfaction as the boys from Oval Avenue piled on nine goals in succession after half-time.

Having endured a heart-breaking loss to South in Round 1, the Eagles were leaving nothing to chance seven days later as they flicked the switch to produce a much cleaner brand of football, which also translated into a significant statistical advantage.

Trailing by four points at the main change after a scrappy opening half, the Eagles broke clear with a third-quarter burst sparked by James Rowe’s set shot snap from the boundary line, restoring the lead seven minutes in.

Nick Hayes was immediately the beneficiary of a free kick after he was felled before the ball was bounced in the centre square, converting on the goal line for a nine-point buffer.

AAMI Rookie Tristan Carcuro, a 27-year-old forward from Sacred Heart, then kicked his first Statewide Super League goal from a mark on the lead, putting the Eagles up by 15 points 10 minutes into the premiership stanza.

It was enough to break the spirit of Sturt, which kicked just one goal in the second half, a quick snap 20 minutes into the final term from one of its better players in midfielder Casey Voss.

There was so much to like about the Eagles victory, particularly the evenness of contributions as seven players had at least 20 disposals, including damaging duo Rowe and veteran Matthew Goldsworthy.

Rowe was at his creative best setting up the play if he wasn’t kicking majors himself while Goldsworthy – playing his 196th League match – relished his opportunity to be released from his regular defensive role higher up the ground.

The 29-year-old was neat with the majority of his 23 disposals while also kicking two majors, one a trademark long bomb from outside the 50m arc in the second term.

Jake Comitogianni continued his development with 22 touches and a goal while Launceston recruit Rhyan Mansell impressed for the Eagles with his poise at half-back for 18 possessions and five tackles.

Potency wasn’t a problem as Nick Hayes and swingman Jake Von Bertouch, enjoying his chance to play in attack, both joined Rowe in booting a trio of goals.

Even former co-captain Pat Guiffreda regularly wound the clock back with his trademark desperation and wily use of his body, giving inexperienced teammates Jacob Wehr and Pierce Seymour the confidence to rebound from the back half.

Despite welcoming back a pair of premiership heroes in Steven Slimming and Jake Sutcliffe – who both had a positive impact on the contest before half-time – Sturt was its own worst enemy with wasteful ball use.

It got tougher after the main change as the Eagles took a stranglehold on the match, the Double Blues having 79 fewer handballs 16 fewer inside 50 entries.

Ken Farmer Medallist Mark Evans led the way for Sturt on the disposal column with 23 as he continued to embrace his role further up the field, using the ball nicely on most occasions by foot.

Voss, the son of Brisbane premiership star and Brownlow Medallist Michael Voss, is developing his midfield craft in positive fashion, tallying 22 disposals and six clearances to go with his goal while defender Sam Wundke was another major positive for Sturt.

A late recruit after initially planning to play with Glenunga, Wundke took five marks and had 20 disposals while ruckman Daniel Fahey-Sparks moved freely around the ground to chalk up 19 disposals, eight marks and a goal.