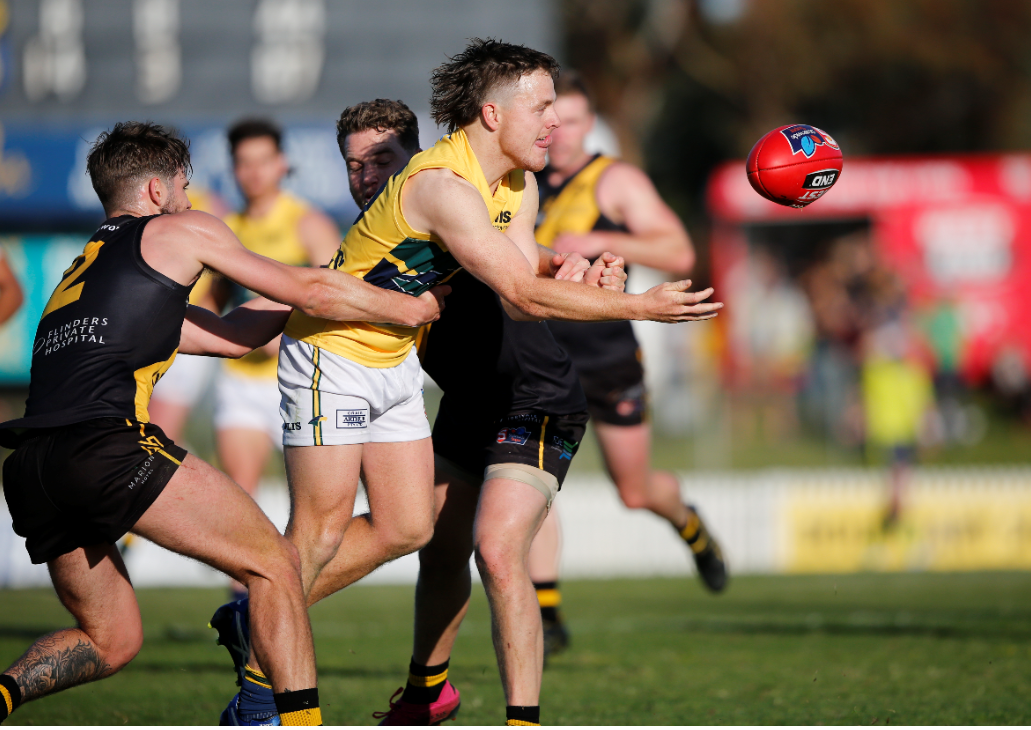 Eagle James Rowe gets his handball away while being tackled by Glenelg's Jonty Scharenberg. Picture - Cory Sutton

Leading by as much as 45 points midway through the third quarter, the Eagles were forced to steady during the final term after the Tigers piled on six of the last eight majors in the match.

Glenelg’s AAMI Rookie Angus Weir produced a memorable snap during the third quarter to start the momentum swinging in his team’s favour.

Jack Oatey Medalist Matthew Snook – who was once again outstanding for his side with 31 disposals, eight tackles and 12 clearances – nailed his set shot to have the hosts within 33 at the final change.

Then Liam McBean booted the first two goals of the final stanza to take his tally to five before fellow forward Luke Reynolds finished off his excellent work rate further up the ground with a third in succession.

But just as they had all afternoon, the Eagles continued to answer as mature-age forward Tristan Carcuro hit James Rowe up on the lead.

Rowe, now leading the race for the Ken Farmer Medal, then calmly slotted his set shot from 30m.

Carcuro was soon involved again after kicking his tricky set shot from the boundary just two minutes later to make Glenelg’s fightback too difficult to execute, with the visitors leading by 28 points midway through the final term.

With the majority of the key stats categories even, the Eagles’ efficiency inside 50m was illustrated by them having 15 fewer entries.

It didn’t matter that captain Luke Thompson was sidelined with a corked thigh or that future SANFL 200 Club member Matt Goldsworthy (glute) was a late withdrawal for his milestone match, the contributors for coach Jade Sheedy were plentiful.

Past Eagles Club Champions Jordan Foote and Joseph Sinor gave their team plenty of drive with 21 and 23 disposals each while Chris Hall and Jake Comitogianni also hit the scoreboard.

Launceston recruit Rhyan Mansell continued his impressive start to the season with 16 disposals and a goal-saving chase and tackle which prevented a certain major to Glenelg’s Marlon Motlop late in the third term.

Reduced to 21 men for the majority of the match after defender Matt Merrett found himself on crutches at half-time, Glenelg had plenty of heart displayed by veterans Snook and Andrew Bradley.

Bradley, one of few Tigers to play four quarters of footy, finished with 35 disposals and 10 marks across half-back and the wings while Magarey Medallist Luke Partington had 25 touches and three clearances.

The Tigers now have a 2-3 win-loss record just inside the top four while the Eagles sit at the top of the table with an impressive 4-1 mark while playing full of confidence.

North Adelaide made its move in the third quarter as it eventually shrugged off a plucky Central outfit by 30 points at X Convenience Oval.

Trailing by 10 points at the main change, the Roosters became more efficient with their ball use entering 50m, much to the delight of premiership forward Mitch Harvey.

Harvey booted three of his four goals during the defining third quarter as the visitors banged on five goals to one while earning a 16-point lead at the final change.

It would prove to be enough as North doubled Central’s goal tally in the fourth stanza to bank another two premiership points to sit firmly inside the top four after five rounds.

Still searching for their first win of the season, the Bulldogs looked on the right path when Nick Gillard snapped truly from close range to earn an 11-point lead late in the second term.

But Harvey and fellow forward Lewis Hender soon took over after the main change as they swung the game in the Roosters’ favour.

Will Combe found Hender on the lead less than three minutes after the restart, the lethal left-footer nailing his 40m set shot.

Bulldog Murray Stephenson hit the post soon after but this only triggered an eye-catching piece of transition play by the visitors, resulting in Harvey being found on his own before nailing another set shot.

Then it was Hender’s turn as he managed to scramble a small foot pass while having one arm held to teammate Kym Lebois, who then finished nicely with a snap from 15m.

Harvey then showed off his experience to use his strength and skill to boot the next two goals in succession opening up a two-and-a-half goal break late in the third quarter.

North vice-captain Tom Schwarz put the icing on his outstanding performance when he made the most of a loose Central defensive pass, letting fly from long range to watch his shot roll through for a goal.

It gave the Roosters a 34-point lead 12 minutes into the fourth quarter as Schwarz went on to tally 36 disposals, five clearances and two majors.

Fellow vice-captain Andrew Moore had 26 touches, four tackles and five clearances while Jarred Allmond enjoyed the wide expanses of the Ponderosa to tally 24.

Lebois added 20 disposals to his two goals while captain Alex Spina was again a calming presence with 20 possessions.

Central ball magnet James Boyd racked up 38 disposals as he shows no signs of slowing while skipper Luke Habel set up plenty of play with 26 possessions.

South Adelaide is sitting inside the top two after a 20-point win against West built on a crushing three-quarter performance at Flinders University Stadium.

The Panthers were superb up until the final change, kicking 12 goals to five while restricting the Bloods to just two goals in the first half.

Aside from Jordan Boyle’s classy left-foot finish for West 14 minutes into the first term, the Panthers dominated the contest by booting seven of the first eight goals to set up victory.

Co-captain Joel Cross was instrumental in the triumph, collecting 26 disposals, six marks, five tackles and six clearances for South while impressive first-year defender Tom Highmore was again a stumbling block for the opposition with 23 touches and 11 marks.

Joe Haines continued his great form with 20 disposals and 10 marks but the service coach Jarrad Wright is getting from his local youngsters must be exciting Panther fans.

Small Panther forwards Beau McCreery and Eamon Wilkinson are proving dangerous, hitting the scoreboard for five goals between them while also combining for 12 tackles.

Engineering 19 more inside 50 entries for the match will please South coach Jarrad Wright but the concession of the final six goals in succession to the visitors will come under notice.

Gavin Colville’s troops trailed by as much as 57 points when McCreery booted his second during time-on of the third term before going on their late charge.

A reinvigorated Brett Turner booted the first two goals of West’s flurry just before the final break before the Bloods piled on a further four before the last siren.

Tireless Bloods midfielder Kaine Stevens had 25 possessions while Hawthorn recruit Dallas Willsmore made a successful return from a groin strain to amass 24 disposals and 14 marks.