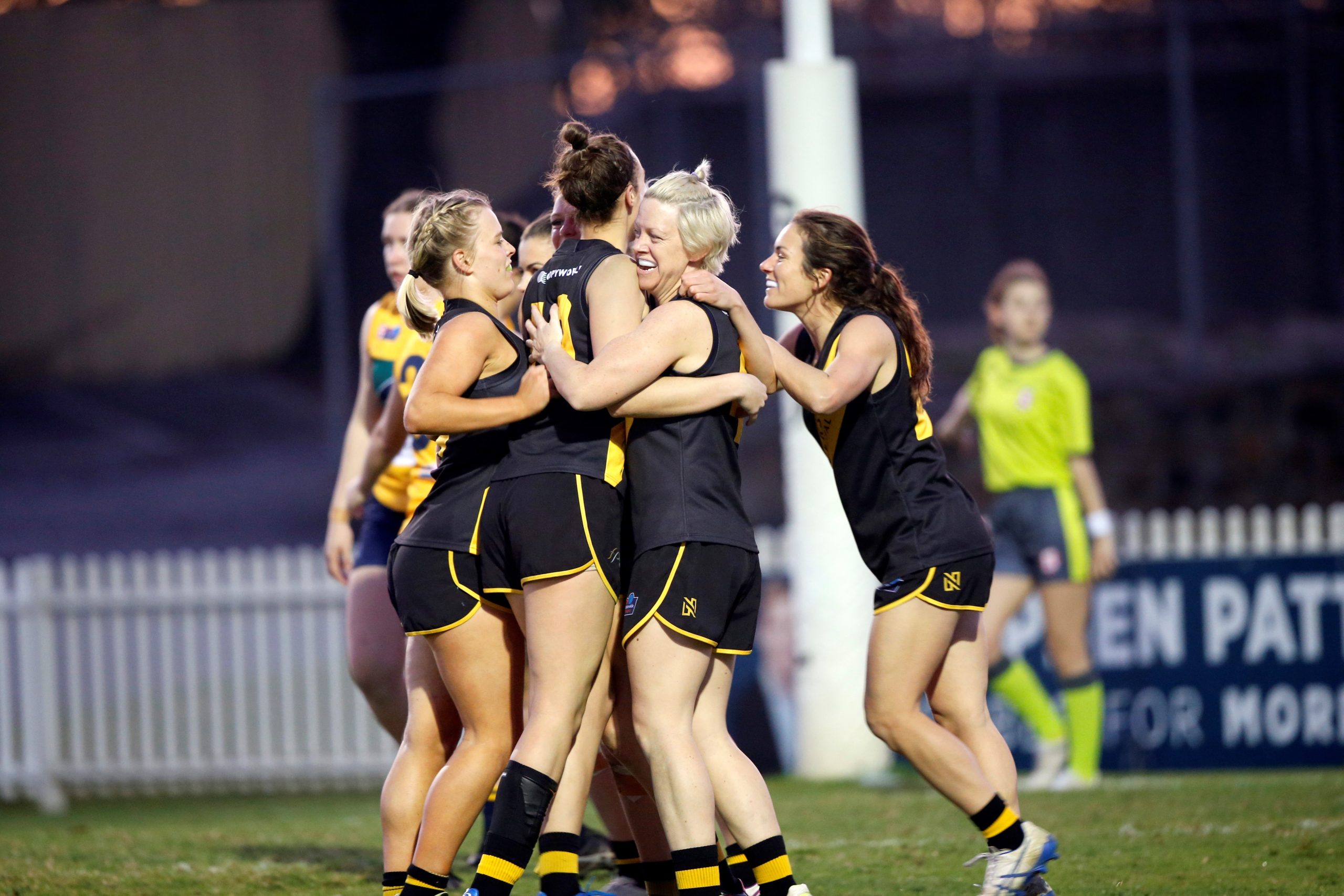 Glenelg celebrate a goal against the Eagles. Picture - Cory Sutton

Glenelg’s bold attempt to snare a place in the Statewide Super Women’s League finals has fallen short despite a convincing 39-point win against Woodville-West Torrens at ACH Group Stadium.

The Tigers, now sitting fifth on the premiership table, needed Norwood to lose to West Adelaide in Round 9 in order to set up a ”mini Elimination Final” showdown with the Redlegs in Round 10.

But it wasn’t to be despite holding up their end of the bargain by leading at every change against the Eagles at the Bay.

Playing without Ebony Marinoff, the Tigers had Caitlin Gould make an impact on the scoreboard with three goals while Sam Franson, Eloise Jones and Madisyn Freeman all performed strongly.

Norwood secured its berth in the Statewide Super Women’s League finals with a solid 11-point win against West Adelaide at Thebarton Oval.

In what looms as a Semi-Final preview, the Redlegs edged ahead early with two goals in the first term before booting another two in the fourth to seal the vital premiership points.

The victory ensured there would be no mini Elimination Final against Glenelg in Round 10 after the Tigers easily accounted for the Eagles in Round 9.

West captain Lauren Rodato led from the front for her side while Stevie-Lee Thompson and Ashlea James were also solid contributors for the Bloods.

Banking a top two finish in the Statewide Super Women’s League, the Panthers led at every change to secure win number eight for the season.

Three goals in the first term set Rick Watts’ team on its way as Western Bulldogs-listed Hannah Munyard booted three of South’s nine for the match.

Central’s Renai Richardson booted her team’s two goals while Lauren Breguet and the Smiths – Shelby and Lauren – held their heads high despite the loss.

North Adelaide has all but secured the Statewide Super Women’s League minor premiership after its comprehensive 82-point win against Sturt at Prospect Oval.

The Roosters have a one game and significant 15 per cent advantage on second-placed South Adelaide heading into the final minor round game against Central in Round 10.

North’s intentions were made clear early against the Double Blues after banging on 6.2 by the first change.

Roosters coach Krissie Steen would have been pleased with the even spread of goal kickers as Ashleigh Woodland, Katelyn Pope, Anne Hatchard, Charlotte Taylor and Erica Greet each booted two goals.

Hatchard, Pope, and GWS-listed Britt Perry were all influential in the result for North.