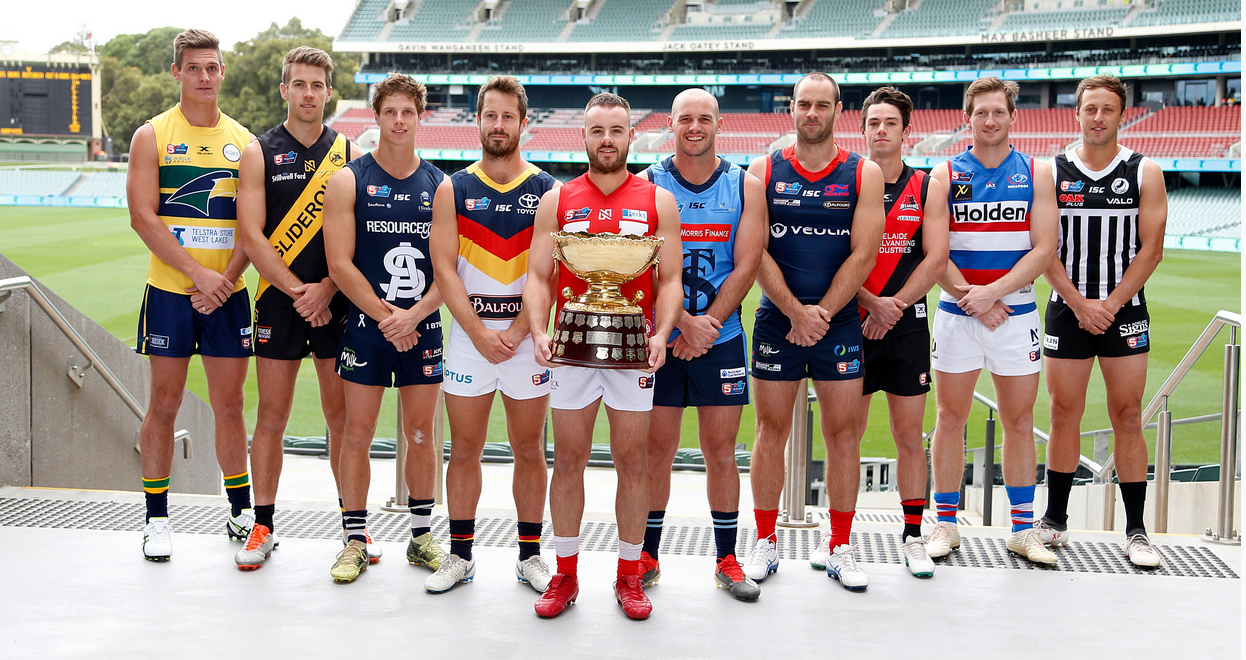 All SANFL Statewide Super League teams will wear a special Indigenous-themed guernsey during round 13. A welcome to country also will be performed before matches to recognise Indigenous people as the first custodians of the land. The round is a celebration and recognition of all Aboriginal and Torres Strait Islander players in our Statewide Super League who have and continue to make such a significant contribution to SANFL and football more broadly.

Central coach Roy Laird will continue his mandate to bring through youth against Sturt on Saturday.

Exciting 17-year-old rover Corey Durdin – who played for the Torrens University SA U18 team at the 2019 National Championships – has been named to start in the forward pocket.

The Kevin Sheehan Medallist – who measures in at just 173cm and 70kg – is a noted ball magnet who also has a knack of kicking a goal.

Durdin has been joined in the Bulldogs’ 23-man squad by utilities Matthew Neagle and Nick Gillard, as well as wingman Matthew Neagle.

Developing trio Cooper Dahms, Jaxon Neagle and Dylan Weaver were sent back to the Reserves.

Loyal defender Luke Habel will play his 150th Statewide Super League game after making his debut in Round 1 2010.

Sturt could welcome back a premiership bigman for it trip to face Central on Saturday.

Former Geelong rookie Tom Read has been named to return for the first time since Round 3 after suffering a serious calf injury which included Deep Vein Thrombosis (DVT).

Read has been joined in the Double Blues’ 23-man squad by possible RAA Rookie Adam Trenorden (19, 177cm and 70kg), who is originally from Hahndorf FC.

Sturt premiership captain Zane Kirkwood will play his 200th Statewide Super League game after making his debut with Port Adelaide in Round 3 of 2008.

South Adelaide has added height to its squad to host the Eagles on Saturday.

Experienced utility Ben Haren and raw rookie Cameron McGree have both been included in the Panthers’ 23-man squad.

The pair have been listed on a five-man extended interchange bench which must be trimmed by two before the bounce.

Woodville-West Torrens has boosted its defensive stocks for the trip to face South Adelaide on Saturday.

Premiership defenders Luke Thompson (hamstring) and Matt Goldsworthy (calf) have returned from minor injuries to be named in the Eagles’ 23-man squad.

They have been joined on the five-man extended interchange bench by utility Sam Rowland.

Defender Joe Heinjus is unavailable after injuring his finger.

Injury-hit West Adelaide will make at least three change for its clash with North on Saturday.

Utility Brett Turner (ankle) will be out for the rest of the season while star veteran Jonathan Beech will miss at least a month with a knee injury.

Impressive midfielder Patrick Fairlie will return from concussion while his brother Connor Fairlie, recruited from South Adelaide during the season, could make his club debut for the Bloods after being named in the 23-man squad.

Connor Fairlie (22, 174cm and 72kg) has been joined by fellow inclusions Lyndon Hupfeld, Keelan Laube and Aaron Anderson on a five-man extended interchange bench while Chol Majok was sent back to the Reserves.

Premiership defender Logan Hill will play his 150th Statewide Super League game after making his debut in Round 2 of 2008.

North Adelaide has included two important senior players as it looks to lift itself off the bottom of the ladder against West on Saturday.

Premiership forward Keenan Ramsey has recovered from a hamstring strain to be named at centre half-forward while vice-captain Alex Spina returns from a one-match suspension courtesy of the SANFL Match Review Panel.

Spearhead Mitch Harvey will play his 100th Statewide Super League game after making his debut with Port Adelaide in Round 1 of 2014.

Adelaide will be without some creativity in front of goal against Port in Port Pirie on Saturday.

Clever goal sneaks Tyson Stengle (AFL) and Shane McAdam (hamstring) are out of the 23-man squad named to face the Magpies.

Riley Knight has also been called up to the AFL squad while Andrew McPherson couldn’t be considered due to an illness.

Veteran Richard Douglas and emerging Jordan Gallucci have been named as replacements inside the Crows’ attacking 50m arc.

Jordan Boyle and Jy Farrer are among the Development Players listed on the five-man extended interchange bench.

Port Adelaide has called upon seven SANFL-contracted players for its Showdown meeting against Adelaide in Port Pirie on Saturday.

Set to tackle the Crows as part of the 2019 SA Country Championships at Memorial Oval, the Magpies look set to include Tom Corcoran and Jack Elsworthy in defence.

The other five inclusions – Matt Appleton, Dallas Hill, Ben Edwards, Simon Wong and Jack Strange – have been listed on the extended interchange bench.

Glenelg could welcome back two talented key position players for its blockbuster against Norwood on Sunday.

Duall U18 All-Australian Will Gould has returned from captaining the Torrens University SA U18 team while high-flying Josh Scott was a late withdrawal from the Tigers’ Round 12 win against the Eagles.

They have been joined in the Bays’ 25-man squad by teenager Finn Betterman and Launceston recruit Rulla Kelly-Mansell.

With seven players on the extended interchange bench, it must be trimmed by four before the bounce.

Norwood has strengthened its line-up ahead of its must-win contest against Glenelg on Sunday.

Torrens University SA Under-18 duo Dylan Stephens and Cameron Taheny return from the AFL National Championships while captain Jace Bode has recovered from the ankle injury which sidelined him in Round 9.

Skilled utility Declan Hamilton has overcome a thumb complaint while Cody Szust has been included after collecting 28 disposals in the Reserves last round.

Defender Tom Forster couldn’t be considered due to a hamstring strain.