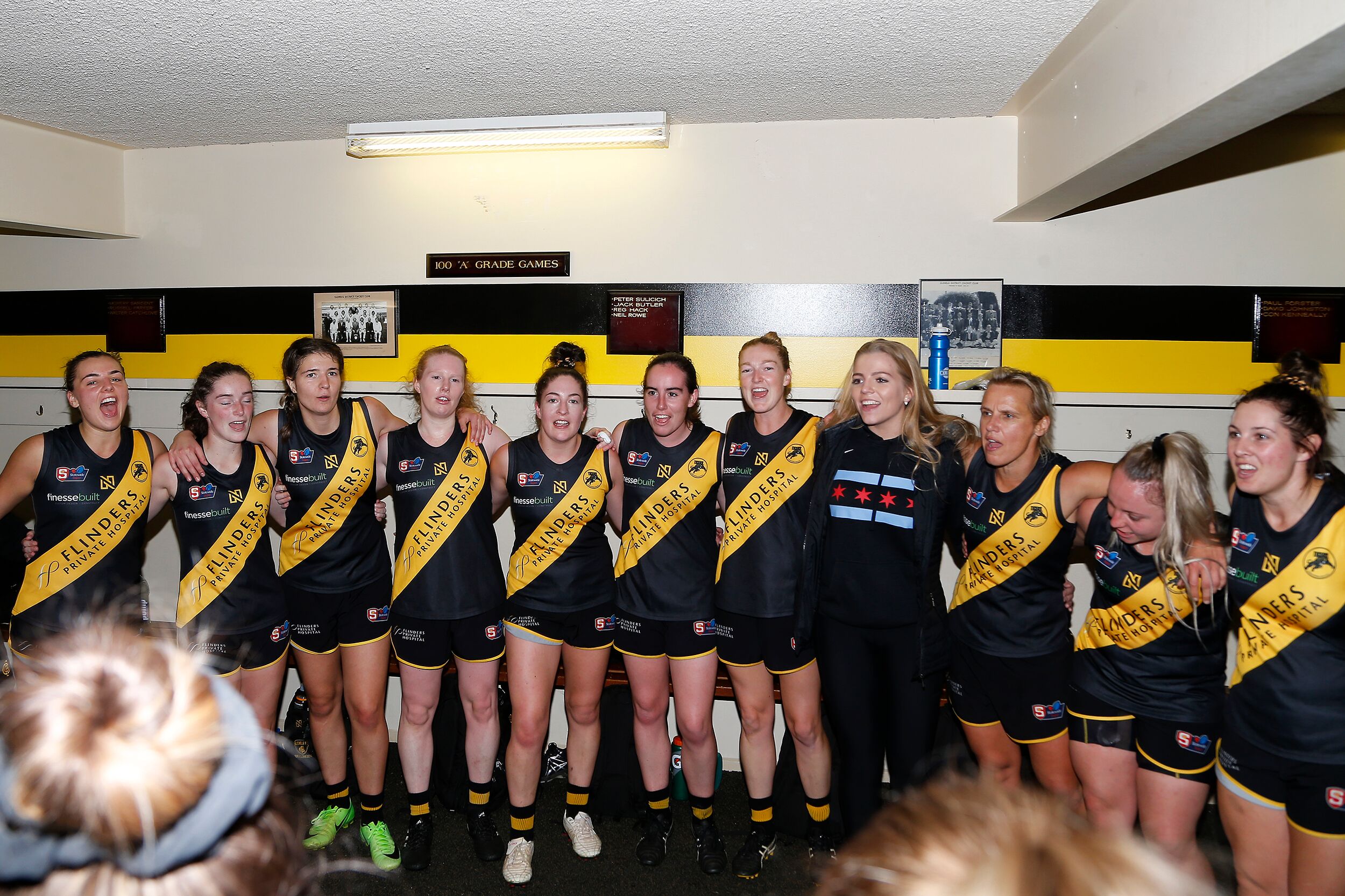 Glenelg on Saturday night snatched the last spot in the SANFL Women’s finals with a 19-point win against Woodville-West Torrens at the Bay.

The Tigers, last year’s wooden spooners, won the last three games of the minor round to edge West Adelaide out of fourth place after the Bloods fought valiantly before falling 16 points short against reigning premier South Adelaide at Noarlunga.

Glenelg finished with six wins and four losses for the minor round, the same as Westies but with a significant percentage advantage. The Tigers’ percentage of 58.3 was clearly better than the Bloods’ 46.2, earning them a place in Friday night’s knockout first semi-final against North Adelaide at The Parade (6pm).

Premiership favourite Norwood (nine wins, one loss) wrapped up the minor premiership with a thumping 68-point win against Central District at Alberton on Saturday, while South (8-2) held on to second spot with their hard-fought win against West, setting up their second semi-final showdown with the Redlegs on Friday at The Parade (7.45pm).

North jumped above the Panthers momentarily after its crushing early-game win against Sturt but was relegated to the knockout first semi-final when South recorded its win.

The Bays were relying on South beating West in a game that started an hour earlier than theirs, then beating the bottom-placed Eagles to qualify for finals for the first time.

Glenelg captain Cass Hartley said the Tigers had deliberately paid no attention to the South-West clash, preferring to concentrate on what they had control over – winning their game.

So when the final siren sounded at the Bay, “we had no idea what was going on … it was like waiting for the Lotto results to see if you had won or not”. The cheer from the players when they heard the news left no doubt of the result of the South-West clash. “We made it a policy that no-one would tell anyone (what was happening at Noarlunga), that no-one would have a phone,” said Hartley, who has played every game in the Bays’ first three seasons in the SANFL Women’s competition. “It was pretty exciting … I was trying to keep a lid on it but at the same time, enjoy the moment – and then we’ll prepare well for next week.”

Hartley said the aim this season had been to improve as a group. “I don’t think we really set the bar,” she said but winning the first three games of the season showed “we really gelled … we didn’t have any players with egos, we just wanted to go out there and play team footy”. One of those early wins was against semi-final opponent North, by 15 points in Round 3.

Dual premiership-winning Adelaide Crows superstar Ebony Marinoff was outstanding in the Tigers’ win against the Eagles. Marinoff, who picked up 35 possessions in her debut for Glenelg against Sturt in Round 9, went one better in her second game, racking up 36 touches. Dual All-Australian Marinoff incredibly picked up 30 kicks, eight marks, nine tackles, nine clearances, 10 inside-50s, a goal and a Dream Team score of 171. To say she is a big danger for the finals is a huge understatement. Hartley praised Marinoff, saying: “You wouldn’t know she hasn’t been with us all year … she just fits in. She’s a Bays girl.”

The Eagles, unlucky not to claim a win in their first Statewide Super Women’s League season, had threatened the Tigers’ finals plans, Chloe Forby booting the opening goal of the clash after three minutes. But Fauser popped up for a strong mark at half-forward and slotted a steadier from an angle five minutes later, before Lucy Bellinger got a toe on the ball in the goalsquare after Marinoff had pumped the ball in long. Just before quarter-time Sam Franson marked and handed off to Marinoff who booted a long goal and frayed Tiger nerves were settling.

By three-quarter-time Glenelg led by 33 points but again the Eagles created a scare, their leading goalkicker Kiana Lee and Jovanka Zekevic booting majors in the first three minutes of the last quarter. Rachel Dunstan added another goal but Franson sealed it for the Tigers with an impressive long bomb.

Nikki Gore showed she will again be a danger player in the major round as she helped South Adelaide earn a place in Friday’s double-chance semi-final.

Classy midfielder Gore, who had 21 possessions and eight tackles in the Panthers’ five-point grand final win against Norwood last season, was the dominant player as South eventually kicked away from West at Noarlunga.

Adelaide’s first pick in last year’s national draft, Gore, who made her AFLW debut for the Crows in their 2019 premiership season, had 20 touches as South fought back from a seven-point half-time deficit to beat the Bloods by 16 points. There’s plenty of talent in this South line-up and Nicole Campbell, Indy Tahau, Czenya Cavouras and Hannah Munyard all had plenty of the ball, while Madison Bennett booted two goals.

West Adelaide may have fallen short – but it wasn’t by much. When Mary Smith, Melanie Elsegood and Rachelle Martin rattled on goals within seven minutes in the second quarter, Westies were in front, the finals tantalisingly within reach. Abbie Ballard, Rachelle Martin and Madison Newman epitomised the Bloods’ never-say-die spirit which saw them all but keep pace with the premiers in disposals (212-222), marks (54-57), tackles (53-57) and clearances (level at 13-13). The young Bloods’ courageous fight right to the end shows a bright future but South has plenty to look forward to right now.

Najwa Allen took another step towards winning the SANFL Women’s medal as this season’s fairest-and-most-brilliant player as Norwood finished the minor round in style with a 68-point drubbing of Central District at Alberton Oval.

Classy Canberra recruit Allen, the biggest possession-winner in the league, averaging 26 per game, dominated from the midfield again as the Redlegs shot out to a 44-point lead by half-time, having kept the first-year Bulldogs scoreless in the first two quarters.

Allen earned 29 disposals, while ruck star Leah Cutting showed her enormous influence with imposing stats of 15 possessions, 12 tackles, 32 hit-outs and two goals. Hannah Dunn, also in her first year from the ACT, also had plenty of the ball, while Sophie Armitstead, Monique Hollick and Sally Riley add to the depth of class at a club aiming to repeat its 2017 premiership success. And former basketball superstar Jo Hill takes some stopping – the Doggies couldn’t do it as she booted four goals.

Central’s season ran out of puff after an impressive start with early wins against the Eagles and Sturt but the Sonneman sisters, Jayme-Lee and Demi, and Kimberley Fry finished impressive campaigns on a good note.

North rolls into finals with purpose

The fight for this year’s flag looks remarkably even but it would be hard to go into a major round campaign in better form than North Adelaide, which missed the double-chance by just one win.

The Roosters made it six wins in a row – by an average winning margin of more than seven goals – by thumping Sturt by 48 points at Unley. The Double Blues ended their campaign with just two third-quarter goals as North booted 9.11 to warm up in style for Friday’s first semi-final.