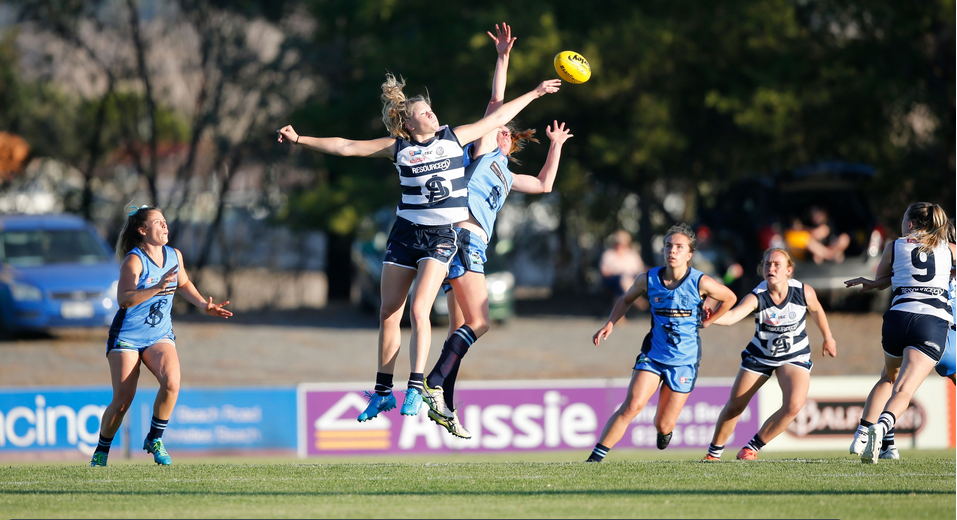 South Adelaide honoured the raising of its premiership flag by overunning Sturt by 32 points at Flinders University Stadium on Friday night.

Determined to get their premiership defence off to a winning start in front of their home faithful at Noarlunga, the Panthers were suddenly on the back foot when the Double Blues took a four-point lead into the first change.

After Sturt co-captain Caitlyn Swanson kicked her team’s opening major of the season, team-mate Lauren Lovell ran into an open goal to immediately cancel out the first six-pointer for the Panthers, which came from skipper Lauren Buchanan.

A sluggish South outfit, playing under new coach Rick Watts for the first time, took until late in the third term to put any meaningful passages of play together.

But deep into time-on of the premiership stanza, the Panthers rattled off successive neat foot passes by Tamara Page, Buchanan, Danielle Goding and Nikki Gore, with the latter’s long bomb being snared by impressive youngster Teah Charlton at the top of the goal square.

Charlton, who had her 2018 campaign crippled by injury, showed off her clean hands by converting her eye-catching overhead mark to put the Panthers a goal clear on the three-quarter time siren.

The classy teenager then made the most of a nice chip over the top from South team-mate Madison Bennett to kick her second five minutes into the fourth quarter.

And the Panthers were in cruise control by the time Charlton booted her third – an impressive snap shot from 20m – just four minutes from the final siren.

Charlton, Hannah Munyard, Bennett, Norwood recruit Nicole Campbell and Gore, who was not selected for AFLW duty with the Crows, were significant influences on the outcome of the match.

Sturt debutante Izzy Kuiper made an impact in her first Statewide Super Women’s League match to tally a team-high 15 disposals, while co-captain Georgia Bevan collected 12 touches and six tackles before having her impact curbed after being caught in a strong tackle in the third term.

With her two goals sandwiching the three-quarter-time break, Bellinger finished with a game-high 23 disposals, 10 marks and five tackles to underline her improvement from last season.

The Tigers kicked clear in the second term by booting 4.3 while holding the Eagles scoreless.

Both of the Eagles’ goals were booted by emerging teenager Kiana Lee while AFLW Academy member Jaimi Tabb collected an equal team-high 17 disposals in her first game for the club.

Norwood overcame inaccurate kicking for goal to grind out an 11-point win against North Adelaide at City Mazda Stadium.

Without a goal until nine minutes into the final term, the Redlegs got a brace from recruit Najwah Allen, who starred in her debut for the club with 20 disposals and three tackles.

Allen and fellow Redleg Hannah Dunn, who impressed with a game-high 29 touches, showed they will be very strong influences on the competition having previously lined up for GWS in the AFLW.

Playing for the first time without a host of stars selected in the AFLW Draft, the Roosters were best served by Amber Ward and new co-captain Natalie von Bertouch, who collected 15 disposals.

Leading at every change, the Bloods were never seriously threatened as they received strong performances from Madison Newman, Rachelle Martin and Abbie Ballard as Melanie Elsegood did the damage on the scoreboard with three goals.

Former West utility Jayme-Lee Sonneman used her experience to rack up a team-high 16 disposals for the Bulldogs while inaccurate kicking in front of goal (0.3) from newly-drafted Crows AFLW forward Katelyn Rosenzweig prevented her from influencing the outcome.

Abbey Scheer, the older sister of Crows AFLW draftee Chloe Scheer, will hold the distinction of being Central’s first goal kicker, with her sole major coming just 74 seconds after the opening bounce.