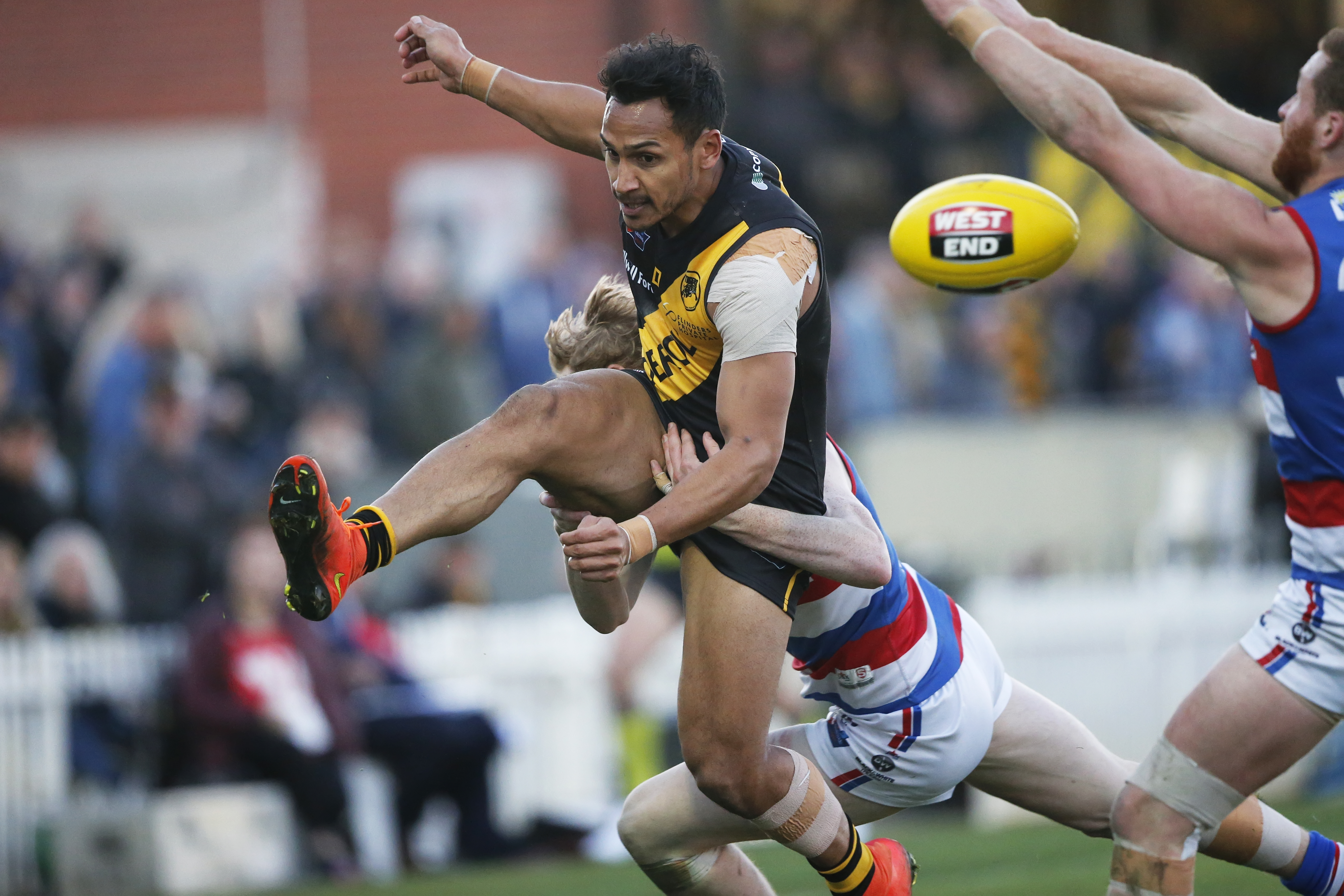 Glenelg is continuing to embrace expectation as it brushed aside Central District by 69 points at ACH Group Stadium on Sunday.

Regaining their place at the top of the Statewide Super League ladder, the Tigers are playing a ruthless, yet attractive, brand of football in all sectors of the ground.

After winning their last six matches in succession last season under then new coach Mark Stone, the Bays have kept this momentum rolling in 2019 as they keep one eye on playing in the major round for the first time since 2011.

”Everyone says you should keep a lid on it but we want to dream big and see what happens at the end of the year,” Glenelg captain Chris Curran told Channel 7 after the match.

”We will keep taking it one week at a time but at the end of the day you are only here for one thing (to win a premiership).”

Glenelg’s defensive game – highlighted by Curran and his deputy Max Proud – has tightened up significantly under the tutelage of Stone and the Round 11 result was no exception.

Each week the goal is to keep the opposition to less than 70 points and despite being on level terms at the first change, the Bays were able to keep the Dogs goalless in a match-defining second stanza.

Central engineered 17 inside 50s to Glenelg’s 10 during the second quarter but could only manage six behinds compared to the hosts’ efficient 5.1.

A 25-point lead opened up at the main change as a result, as Glenelg extended the margin to 55 by three-quarter time.

The Tigers’ deep midfield rotation took control in the second half, with Marlon Motlop superb for 35 disposals and two goals while Matt Snook, Luke Partington, Andrew Bradley and Jonty Scharenberg all contributed strongly.

By the final siren, the Tigers had 20 more inside 50s than the visitors much to the delight of their dangerous forward line which was led by Liam McBean, who booted six classy majors to head the race for the Ken Farmer Medal.

Josh Scott worked hard for his four goals while Luke Reynolds, Darcy Bailey, Cory Gregson and Brad Close all played their role inside 50.

And if things weren’t being lapped up by the Bays fans enough, RAA Rookie Seb Kerrish provided plenty to cheer about when he nailed the final goal of the game.

The 20-year-old debutant pounced on an errant Central defensive pass to intercept without breaking stride before kicking his goal on the run at speed from 30m.

Every Tiger on the ground came from all directions to congratulate the lanky left-footer on the opening goal of his League career.

Central coach Roy Laird was left to rue his side’s inefficient second term as he continued to receive strong service from his senior players.

Dogs midfielders Jarrod and Travis Schiller, forward Justin Hoskin and defender Luke Habel did their best to lead from the front but their inexperienced team-mates were unable to follow suit.

Second-gamer Steve Burton against showed positive signs in backing up his eye-catching Round 10 debut to finish with 21 disposals, nine tackles and a goal.

Youngster Cooper Dahms got through his first League game since Round 7 last year after ACL surgery, setting up a Jydon Neagle goal which broke the Tigers’ run of nine majors in succession from 24 minutes into the first term until the 17th minute of the third.