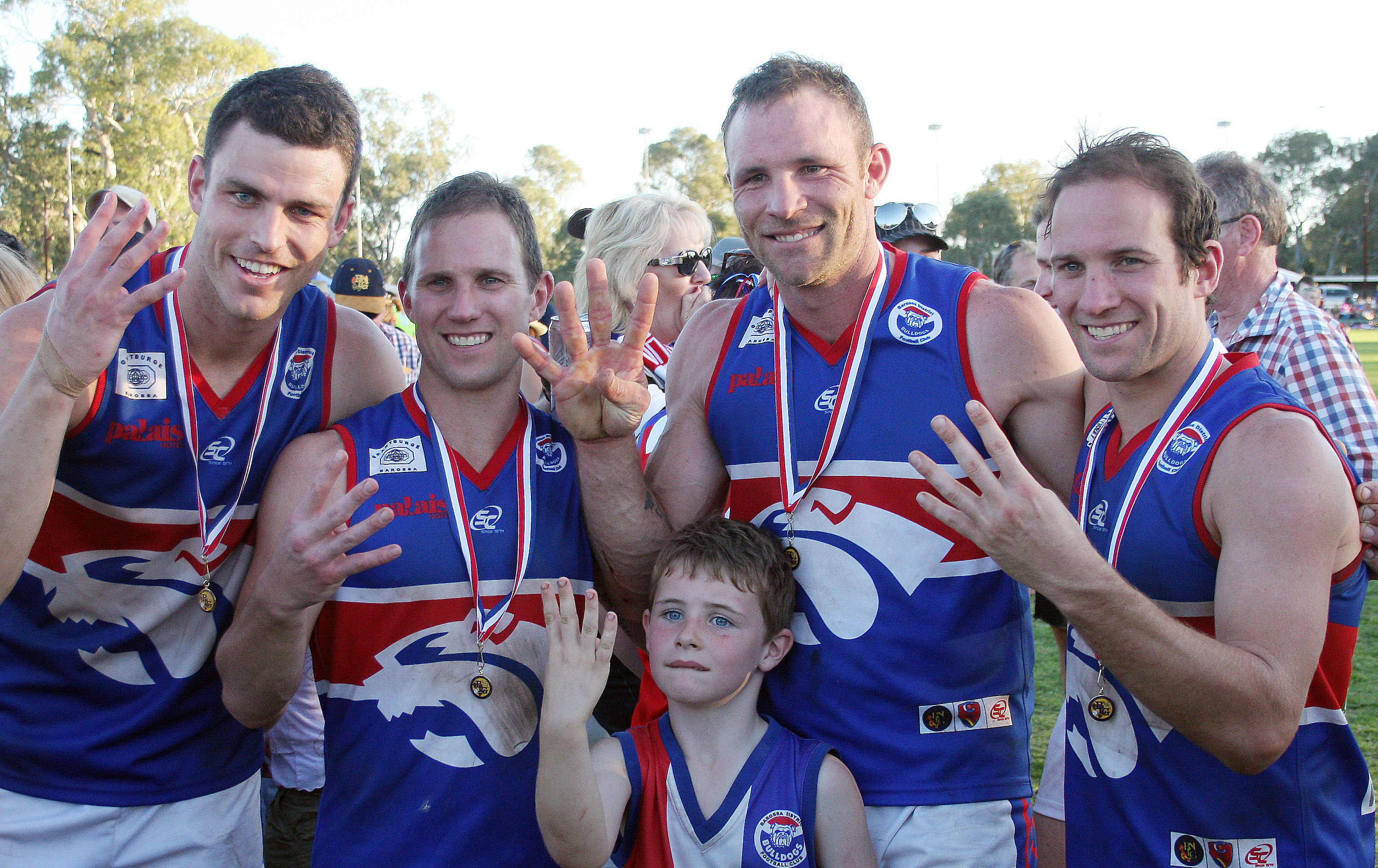 In the second of a series of articles, Peter Argent looks at a quartet of new and returning coaches in the Adelaide Football League, Northern Areas and Great Southern competitions.

After a stellar playing career in country football, Matthew Stelzer will take his first steps into senior coaching, taking on the role as the mentor of the Portland Football Club in the Adelaide Football League’s Division 3 competition.

“It is exciting and I’m going out of my comfort zone, but I’m looking forward to the new challenge,” Stelzer, pictured above on the far right, said.

“I come from a team-orientated background and have a career in self-development working in the fitness trade.

“I was an assistant coach in 2018 at Barossa District, whilst still playing and this year I played a few games alongside my brother Paul (coach) at Lincoln South.

“In a coaching and mentoring role, it’s about building relationships.”

A hard-working and skillful midfielder, Stelzer won five Bulldogs Club Best and Fairest awards and was a member of the Barossa-Barrier-Murray-Mallee 2008 Country Championships success.

After a season back at his foundation club, the North Whyalla Magpies, defender Luke Seymour will take over the senior role at Crystal Brook next year.

“I went back home to North to play in their Centenary season this year and we were beaten by three points in the preliminary final,” Seymour said.

“While our team is ageing a little, we’ve got a very experienced group that has been together for a fair while now.

“I’m lucky to have great mentors of the club like Shane Arbon and Luke Slattery who are both previous coaches.”

Crystal Brook played in the 2019 NAFA Grand Final, going down to Broughton Mundoora.

State country captain in 2018, Todd Miles has moved to coach the Goolwa-Port Elliot Football Club for the 2020 campaign.

Miles, who started his career at Hamley Bridge, also enjoyed a premiership with Mintaro-Manoora in 2008. The tall utility is a Barrie Robran Medallist and a SANFL Grand Final Captain at North Adelaide who has just come off four successful years with the Barossa Districts Bulldogs.

“This is another new opportunity and challenge for me, as eventually I’d like to get involved in football on a full-time basis,” Miles said.

“I’d expect the competition to be around the same as I experienced in the BLG – a tough and uncompromising league.

“It’s also good to get Magarey Medallist Jimmy Allan on board to play alongside of again.”

In the past four years, Miles has taken Barossa Districts to the finals each campaign and enjoyed the ultimate success in 2016 and ’17.

“Yes, I’m taking on the Westminster Old Collegians side coaching role, which has consolidated in Division three in the last couple of years,” Sherwood said.

“I’ve coached them previously from 2013 to ‘15 we had flags in Division Six and Five level in the first two of those years.

“It was great to be involved as an assistant to Mark and I’d like to implement a lot what I’ve learnt from my time with him this year.

“We have also good communication and links with the Westminster School and have recruited former West Adelaide premiership player Aaron Fielke, along with Jason and Brad Eagle for 2020.”