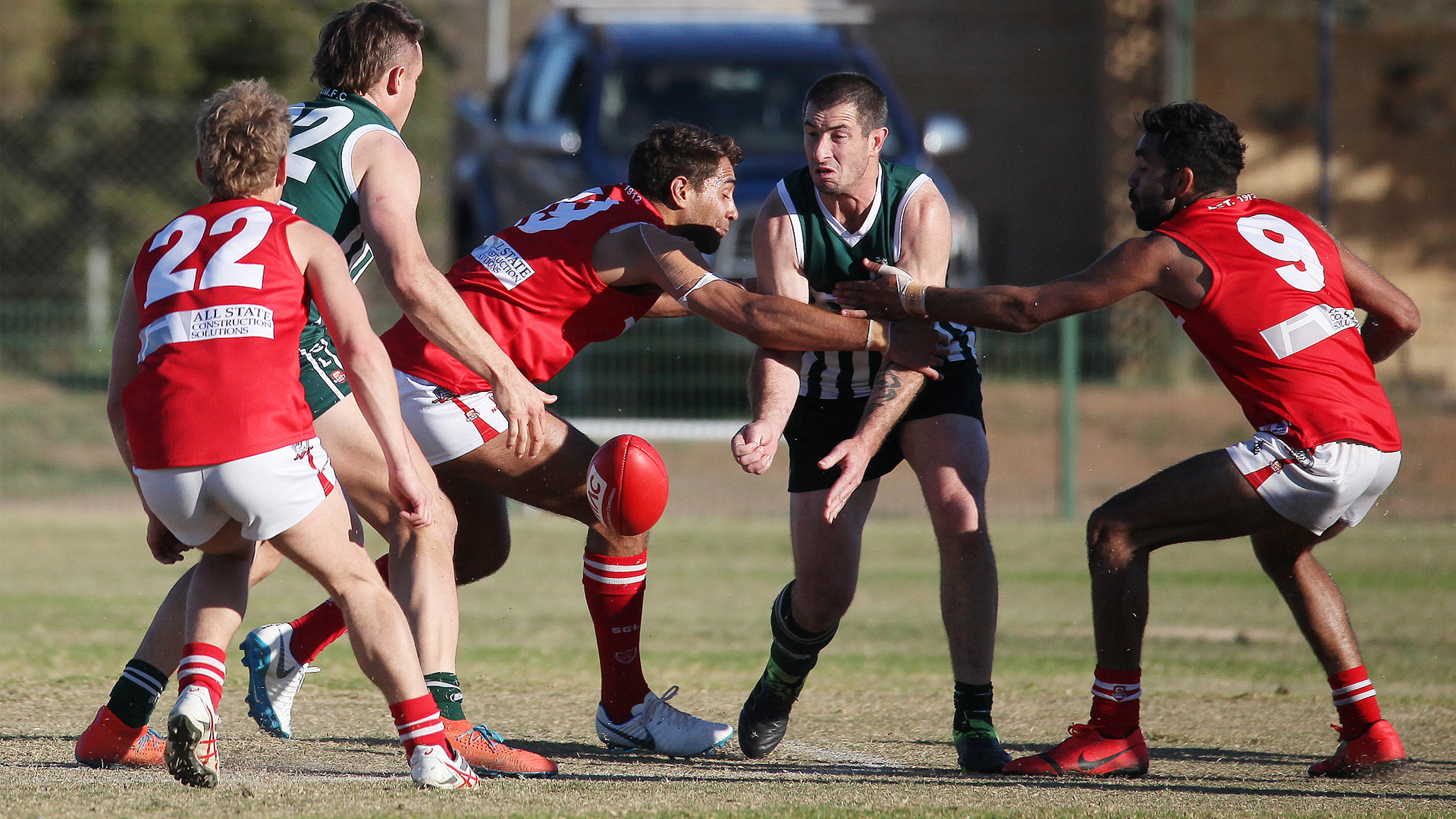 In the battle of the two breeds of SGFL Bulldogs, Ports started aggressively after Bob Boston’s pre-match speech and kicked three of the first four goals of the game on home soil.

Then the reigning premiers South Augusta kicked the next 11 goals, taking a 49-point lead into the half-time interval.

Ports, in their famous green and white colours, responded after the main break and kicked five goals to two in the third quarter and finished off the game solidly, although going down by eight goals.

Former North Adelaide and CMS Crows footballer Kriston Thompson was simply outstanding in the midfield for South Augusta, with his exquisite ball skills, as was the mercurial Aziel Stuart at different times.

Kahran McKenzie, along with the extroverted and polarizing Vince Urbanic, kicked three goals each for South.

Ports’ young talent Liam Dreaver collected the Hugh Murphy award for his performance in this game while defender Jesse Vivar was best.

Zak Hutchinson had a strong impact as did fellow midfielder Adam Coe.

Veteran Greg Phillips kicked five goals (and laid a tackle) to be among the best players as well.

In the games between fellow Port Pirie sides, Prop Risdon and Solomontown, where first on the ladder (Props) played third at Memorial Oval, the Lions had a three-goal victory after only four points separated the sides at half-time.

For Prop Risdon, Tyler Eckert was their best followed by Stuart Hill and Luke Patterson.

Joseph Caputo was the Cats’ best followed by Riley Hayes and Riley Bernhardt.

Corey Davey and Lachlan Knnibs with three goals also had their moments.

Both West and Central Augusta have five wins after 13 rounds and are fighting for fourth place currently, separated by percentage.

James Little was the Bloods’ best in this game at Central Oval, followed by Caleb Williams and Nathan Khan.

Jared Reid kicked three goals in the victory while Jack Muirhead and Lucas Hill also had an impact.

Jason Dare-Ryan and Damien Kroes also were constructive, while the third generation of the famous Duffy family from Orroroo, Declan kicked two goals for Port Augusta’s most successful football club, the purple and white Hawks.

There were a couple of interesting results in the Round 14 clashes of the Northern Areas Football Association.

At Port Broughton Oval, in the clash for top spot, the visiting Crystal Brook Roosters delivered an emphatic 70 point win over their hosts.

Will Combe continued his stellar season and was best for Crystal Brook, followed by Adam Kupsch and Luke Bartlett.

Jason Eagle chimed in with four goals, while Combe added to his individual performance with three majors.

There were only two guys to hit the scoreboard for the Eagles, being Millicent recruit Hamish Nitschke, who kicked four goals, while competition leading goal kicker Gene Robinson was held to just two.

Fraser Kessling and Jack Dickeson also had their moments.

In the battle for third spot, Booleroo-Melrose-Wilmington had a convincing 47-point win over the Southern Flinders Tigers.

The Kangur brothers, Lukas and Aleksander were in the best players, with the latter also snaffling four goals.

Just one game behind Southern Flinders and the BMW Lions, Orroroo are in fifth position and had a percentage-boosting win at Victoria Park, Jamestown.

Midfielder Darren Hughes was the Roos best, followed by Josh Lawson, another Mail Medalist John Nicholas and one more with this honour, left footer, Brodie O’Dea.

This is the third time the Magpies have been restricted to one goal in a game and they have passed the 10-goal mark this season just once, against Southern Flinders in Round 11.

There were three one-sided fixtures in Round 15 of the Whyalla competition with the closest margin being 78 points.

Shannon Winders (three goals) was best on ground followed by Matthew Holmes and Nathan Grzona, who both kicked five goals.

Luke Karssen was the Roos’ best followed by Jordan Henderson-Ewings, Kane Grund and Ryan Skinner.  The Central Whyalla Roosters defeated North Magpies by 78 points, after being 64 points up at half-time.  The quartet of big fella Scott Collison, Brendan Colson, Nick Sims and Clifford Pickhaver-Tupe all kicked three goals for the Roosters, with Marco Tansell their best.