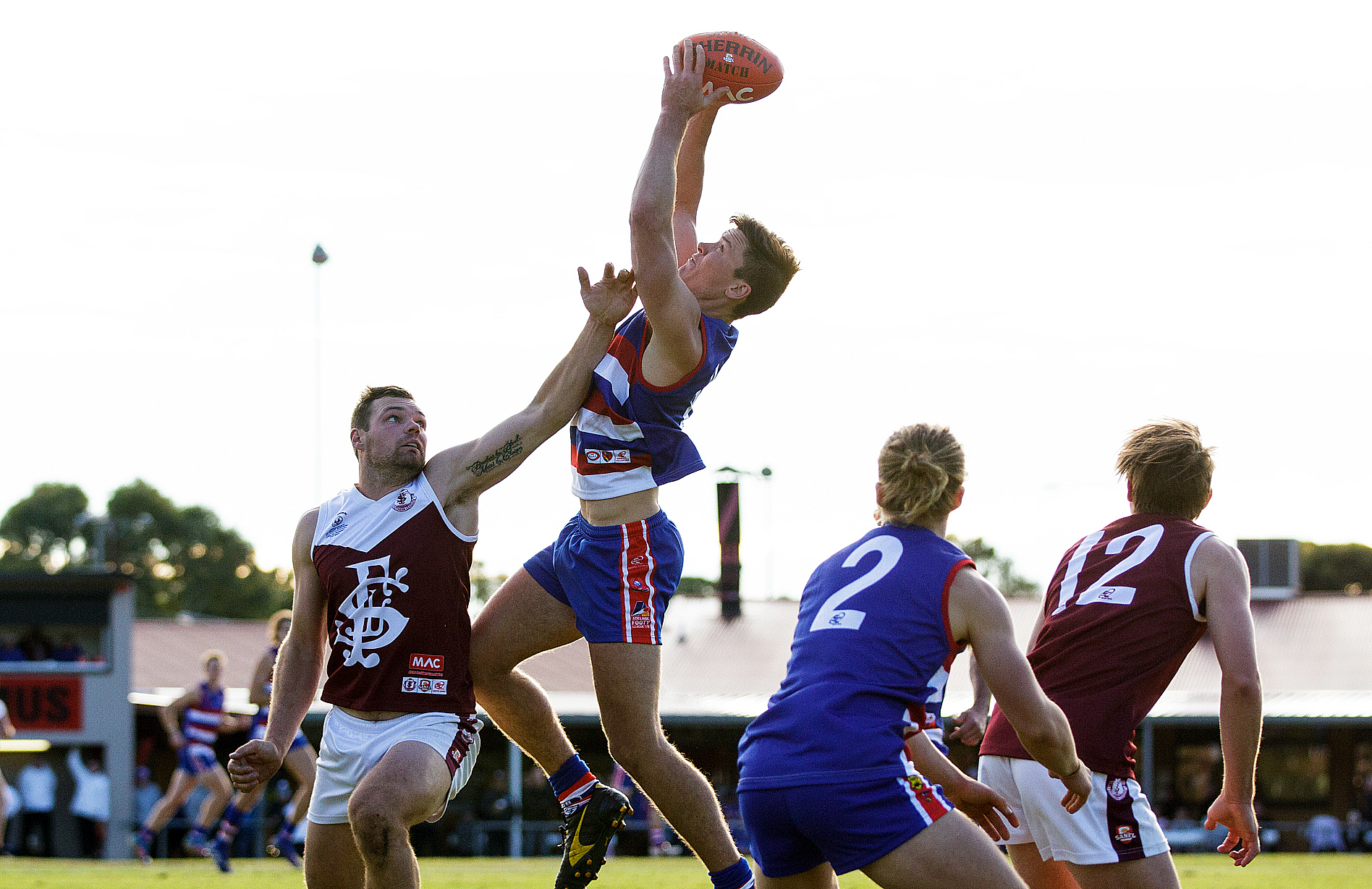 Since 2007, the Landmark Cup has been an inter-league competition between associations across the Mid North region of South Australia, including Adelaide Plains, North Eastern, Northern Areas and Yorke Peninsula football leagues.

The 2019 event was held in pristine conditions at the Riverton Oval on Saturday of the Queen’s Birthday weekend.

In the opening round hosts North Eastern had a comfortable 13-point win 6.5 (41) to 4.4 (28) over the Adelaide Plains. Yorke Peninsula had control of their encounter with Northern Areas, winning by 21 points.

This set up a Grand Final match between the North Eastern side coached by former Brinkworth Spalding Redhill (BSR) Tigers stalwart and now umpire Paul Meyer and the Yorke Peninsula side, mentored by former state country footballer and cricketer, Adam Pitt.

“We were four goals down at one point during the first half, as North Eastern flew out of the blocks, starting very well,” Pitt explained.

“I needed to shuffle our midfielders around and we gained the ascendancy in this area after the initial onslaught.

“We kicked a couple of important goals before the break from this point we play some pretty good footy especially across the second half.”

“Jake Turner, a strong-bodied onballer from Moonta was our player of the tournament,” Pitt continued.

“All others to perform strongly at different points, included Turner’s Demons teammate Jono Ross in rock and Scott Mumford from the Southern Eagles who was a good target in attack.

“A couple of the younger players Bailey Hann from Wallaroo and Josh Smithson from Butte also play their roles well.”

This is the Yorke Peninsula Football League’s first win at senior level since 2014 with Pitt and Captain Abraham Helfand (Paskeville) lifting up the landmark Cup in triumph.

Northern Areas claimed third position following a strong 28 point win over the Adelaide Plains team in the battle for the minor placings.

In the under 17 competition, which runs concurrently with the senior matches, the Yorke Peninsula side coach by Ricky Depledge led the Teenager Yorkers to its fifth consecutive title at this level, with Kadina Bloodhound Finlay Hanson as his captain.

A stunning unanswered six goal third-quarter set up Great Southern’s victory in the Pilmore Cup at Morphett Vale over the Queen’s Birthday weekend.

Named after Barry Pilmore, who has been involved with both leagues as an elite player (Southern) and an elite coach (Great Southern), the annual match is a high quality contest between the two associations south of the city.

Great Southern, coached by Peter Galbraith (Mount Compass) and captained by Shaun Beath (Willunga), were just five points up after enthralling first half, however a powerful third-quarter saw them run away with a 34-point triumph.

“We made a couple of positional moves at half-time and our six goals to two points in the third quarter changed the context of the game,” Galbraith said.

“For this game we had an extended bench of five and we rotated the mids through the forward line which sparked the troops.”

“He edged out James Matthews, who kicked four goals from his wing and had a big third-quarter.

“We moved Jake Stanfield onto Michael Galley who was getting off the chain at centre half forward for them in the second quarter and he did a good job.

“Mount Compass lad Andrew Hunter – who was our vice-captain – was excellent on ball and Max Wakefield forward pressure was outstanding.”

Along with Matthews, Tom Pinyon kicked four goals for Great Southern while former Sturt and Glenelg footballer Ziggy Vitkunas and Marc Elliott kicked a pair each.

Along with Schultz and skipper Galley, others to impress for the Southern League included Mitchell Johnson, who was exciting especially in the second half and Reynella Wine-Fly Damon Arnold.

Dylan Williams from Port Noarlunga and Flagstaff Hill’s Sam Smith both kicked two goals each for the hosts.

The best performed players from these sides will make up the nucleus of the Southern Districts combination team at the SA Country Football Championships in Port Pirie during July.

In the sixth year of the event, the Western Border League collected the title for the third time defeating Mid South East in the grand final by 14 points, 6.4 (40) to 4.2 (26).

Each team plays their opponents once in a round-robin format, with the top two teams progressing to the grand final. In highly entertaining day of footy at Naracoorte Oval, all the round-robin matches were competitive and closely contested.

It started with the Western Border boys getting up by two points against KNT side in the opener.

KNT also endured a heartbreaking two point loss in their second game against MSE as well.

In a pre-cursor to the grand final match the third game was also an outstanding affair with Western Border defeating MSE by just three points.

In the final was Western Border’s best was Jake Schutz, followed by Jaden Eldridge and Tommy Sullivan, while both Todd Reid and Sam Willis kicked two goals each.

Former Sturt footballer and state country representative Jack Kelly from Robe was MSE’s best, followed by Jake Whel, who was his association’s best player across the day. Andrew Stone and Under 21 Ned Wilke performed well, with Brodie Foster kicking three goals in the loss.

The under 17 Limestone Coast Carnival title was won by KNT, who defeated Western Border handsomely by a 31 point margin in the final.

Zac Bradley from Western Border was the player of the tournament for the under age level.