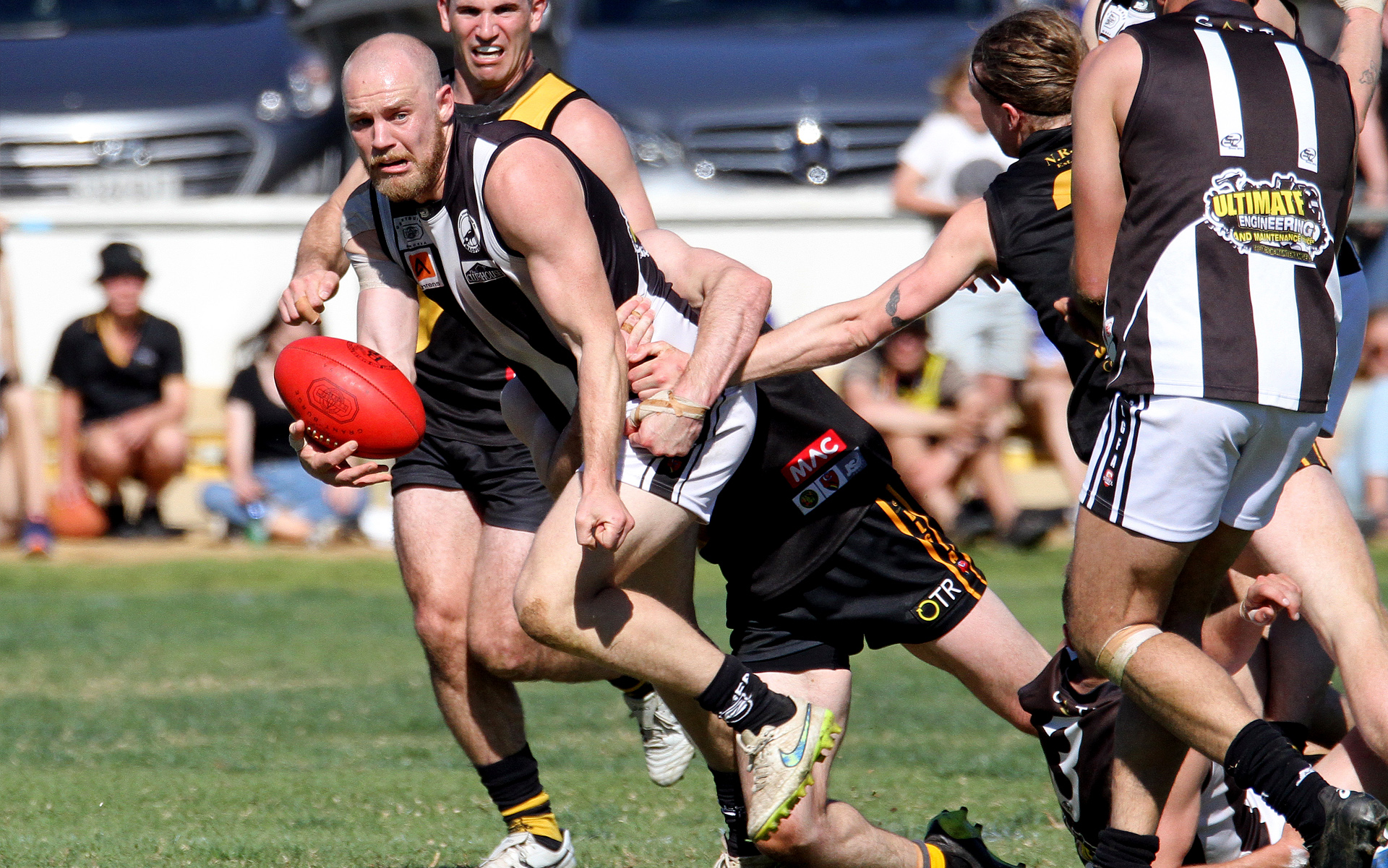 Magpies verses Tigers rivalries are highly anticipated and permeate across our code, from the very top level of the game through to Community Football.

Clashes between Collingwood and Richmond at AFL level, Port Adelaide verses Glenelg in the SANFL and crosstown rivals, just 6km up the road from each other, the Tanunda Magpies and the Nuriootpa Tigers, have the same passion and parochialism.
Adding to last Saturday’s round nine clash between Nuriootpa and Tanunda was last year’s BLG Grand Final opponents we’re also playing in the annual George Heath Cup fixture, which further celebrates their traditional rivalry.
The scores were level at Centenary Park, Nuriootpa Oval, at quarter time before Tanunda took the game away from last year’s premiers with five goals to one in the second term.

They doubled this again in the third and despite a last quarter charge by the hosts won by a comfortable 16-point margin 14.5 (89) to 10.11 (71).
The oldest of the three Westhoff siblings, Leigh, continued his impressive first half of the year by having an outstanding game as did fellow Magpies midfielders Lachlan Earl and Riley McPharlane.

Aron Fechner with outstanding in defence, with feisty captain Ben Schiller and Ben Biagi both being influential.

Playing coach Dean Terlich (pictured above) kicked three goals has did key forward Josh Trembath in his return match.
For a second week in a row Tim Dimasi was the Tigers best, followed by Aseri ‘Bobby” Raikiwasa, Carlson Clark and Jackson Baldwin.
In the battle between 130-year rivals, Willaston were unable to match the South Gawler Lions.

A big second quarter where the Lions kicked seven goals set up the victory and they followed this up with another seven in the last, ensuring a big 61-point triumph.
Skipper Jackson Dare, fellow midfielders Daniel Goulding and Nathan Bartsch with five goals, Darcy Judd Smith, Jackson Press and Bailey Zobel all dominated for the Lions.

Along with Bartsch’s haul of five, Press, Goulding, Patrick White and big Jack Osborn all kicked three goals.
Michael Clinch continues his outstanding a season across half back, reading the game superbly.  Youngsters Lee Sutton and Brodie Cormack also won the share with the ball, while Jamie Clarke, Jackson Phillips and Zac East were noteworthy for the hosts.

In another important game between second and third on the ladder (before this round started) Angaston hosted the Freeling Redlegs.

Although marred by inaccurate kicking, Angaston had a slender seven-point advantage at half-time and that eked out to 15 points at lemons.

Enigmatic talent Ryder Eberhard was the key target in attack with five goals while the defensive group led by James Paprotny, key defender Matthew Blenkiron and Jack Miles was outstanding.

Mark Cussadia’s milestone 200th A grade game for the Kapunda Bombers, who travelled down Williamstown Oval against Barossa Districts, wasn’t a game to remember.

At Wudinna Oval, the Magpies had a handy four-goal win over Central Eyre.

Both Chandler May and Keron Cummings kicked two goals each for the Doggies.

The West Coast Hawks had a convincing victory over the Western Districts Tigers at Poochera Oval.

Jess Kennedy,  Jake McEvoy with four goals and Braden Homes, who snaffled five majors, stood up for the winners,  while Nicholas Schumann was also noteworthy.

Callum Cook kicked two of the Tigers’ three goals while evergreen veteran Scott Feltus is still having an impact.

Best player for the Tigers were Broadie Chandler followed by Charlie Williams and Joseph Williams.

The Wirrulla Bombers – celebrating their 100th year since formation – had a strong win over Elliston at home.

Waylon Drew, the experienced Ryan Watson and Benny Brown all had significant performances for the Bombers.

For the Roosters, Sam Casanova was their best followed by Dale Bache and Tommy Bascomb.

In the first game of the double-header played at the Roxby Downs town Oval, Olympic Dam faced off against the Hornridge Magpies

A five-goal first quarter set up victory for the Magpies and they went on to win the game by an emphatic 97-point margin.

Graham Walker was the Magpies best followed by Mitchell Cavanagh and Jay McCarthy.

Amongst nine different goal kickers for Hornridge, Troy Mordaunt kicked five in his first game for the year, while Michael McArthur, Brendan Lehman, Lachlan Munro and Anthony Carlisle each finished with three.

In the 2.30pm fixture, between first and second on the ladder, Roxby defeated the East Roxby Roos by 52 points.

Starting very well and having a significant half-time advantage, the Roxby side controlled the contest and collected a fourth win over the opening six rounds of the campaign.

Ben Scott kicked a game-high four goals while Cody Kenny, Jake Roberts and Buza each finished with a brace.

For the Roxby Roos, Tyron Cribb was their best.

He was followed by Curtley Dadleh and the well-travelled former SANFL League footballer David Allocca. Cribb and Nathan Yates both kicked two goals for the Roos.