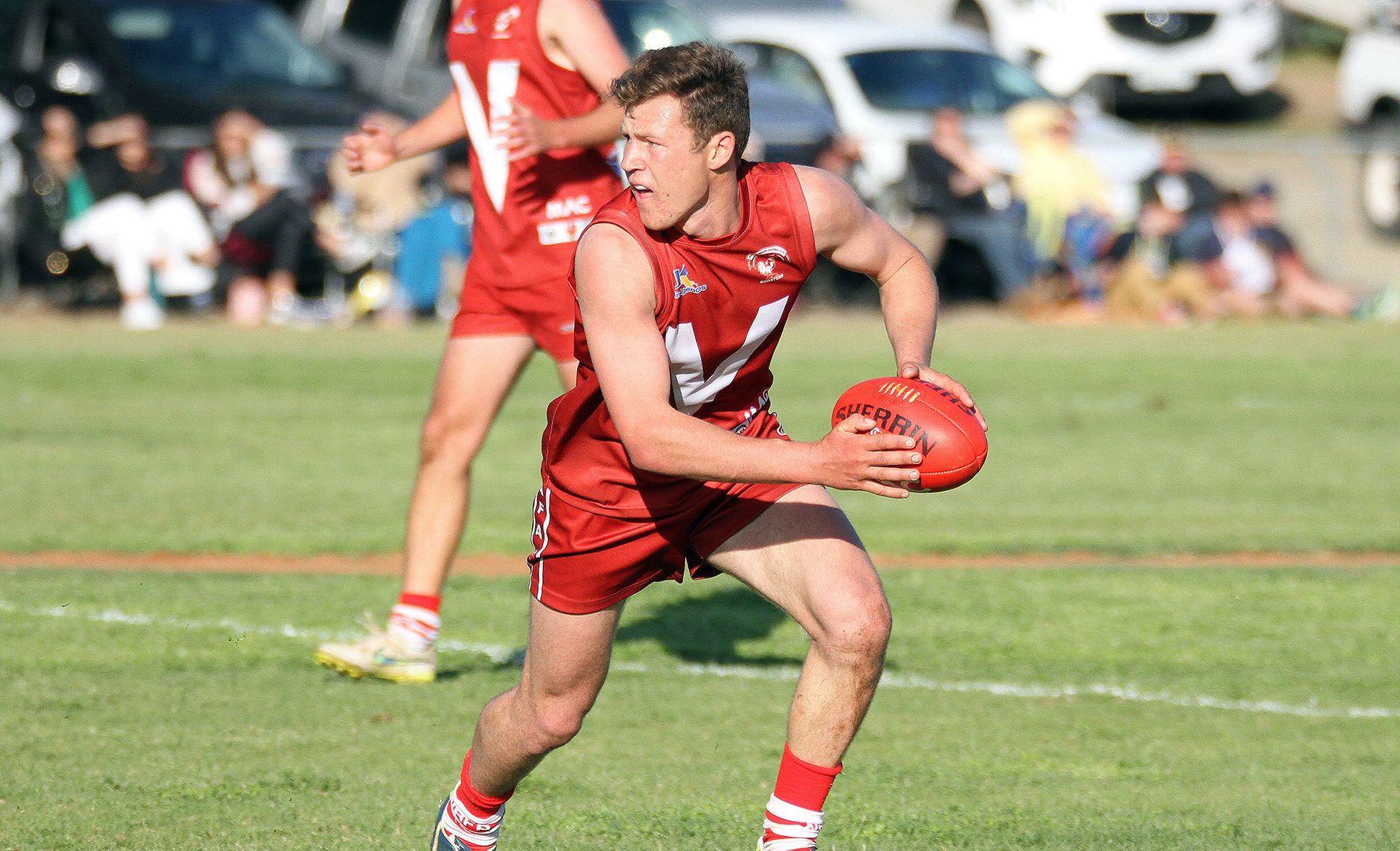 Starting the season 2019 campaign with a replay of last year’s grand final, 2017-18 back-to-back NAFA flag winners Crystal Brook travelled across to Orroroo Oval to play the Roos in what was an exciting contest.

With older brother Campbell back in town with the North Adelaide Roosters, Will Combe took up the mantle for their foundation club, vying for best on ground honours in the Brooks’ first premiership points. He was well supported by half back Nathan Lambert and full back Brad Eagle.

One of the games’ leading performers in a losing side was Roos’ first-gamer Josh Lawson, a former Kadina Bloodhound, while Darren Hughes and Denis Redden also had an impact for the hosts.

In the exciting game of football at Malseed Park, East Gambier held on to clinch a five-point win over West Gambier.

The game was tough and tight all day, with only one point separating the combatants at three quarter time.

Riley Janeway was the East Gambier Bulldogs’ best, followed by Nick Lock and Giancarlo Cooper, while for West, Tommy Zeitz was a stand out.

In another thriller across town at the Blue Lake Sports Park, the South Gambier Demons defeated Casterton by two points after being 15 points in arrears at the half-time break.

Millicent Saints defense of its break through 2018 premiership got off to a modest start with North Gambier charging away in the second half.

The Tigers kicked nine goals to one in the third quarter and would win by a significant 64-point margin.

Tom McLennan was outstanding, while the mercurial Justin McConnell in his first game back in charge finished with a haul of eight goals.

For the Saints, Tom Hutchesson, who has played a couple of SANFL Statewide Super League games for the Crows this year, was best.

The Super Roos endured a one-point defeat at Pinnaroo Oval, going down to the Karoonda Magpies by just one point (71-72).

In other games, after a winless 2018 Murrayville had a seven-point win over Lameroo Hawks. Jericho John kicked five goals to be the Bulldogs’ best.

The closest game in round two of the Great Southern competition was the Encounter Bay boys’ 16 point win over Yankalilla at home.

Nick Marshall kicked five goals in his first game for the year while James Bradford was the Eagles’ best followed by Andrew Fyfe. In his second game for the Yankalilla Tigers, Xavier Gotch was their best.

Reigning premiers Langhorne Creek had a comfortable six-goal win at McLaren Vale Oval over the McLaren Eagles. James Sellar was outstanding for the Creek, with team mate Jarrod Kellock kicking seven goals to add to his four the previous week.  Max Wakefield was McLaren’s best with four goals.

The Willunga Demons had a huge win over Myponga Sellicks with Scott Hunt kicking seven goals, while best on ground Jake Standfield finished with a haul of six.

In the Barossa Light and Gawler competition, three of the four games were decided by less than a single straight kick, including a couple of heart-stopping finishes.

At Angaston Oval, Tanunda won with the last kick of the day when Leigh Westhoff read the ball off the pack and snapped truly from 40 metres out to give Tanunda a thrilling one-point win.

For the Panthers, who now have a losing streak that goes back to August 2016 on home soil, Steve Summerton was outstanding with upwards of 30 handballs among his 40 plus disposals.

Meanwhile at Elliot Goodger Reserve, hosts Willaston Donnybrooks had a set shot in the final minute of the game to grab victory over reigning premiers Nuriootpa, however the ball slipped on the wrong side of the goal post.

Nuriootpa got up by four points and Beau Shinnick was outstanding for the Nuri Rovers. He and key forward Sam Gordon both slotted through four majors for the Tigers.

Michael Clinch was outstanding across half back for the Donnybrooks, while veterans Chad Norsworthy and Ash Fry also took the eye.

Barossa District held on at Williamstown Oval against South Gawler by three points in a game that had plenty of ebbs and flows all afternoon. In his triumphant return game to A grade football, four-time Bulldogs premiership star Darren Sharp kicked four goals while teenager Ethan Gant was the Barossa’s best.

Former state amateur player Brodie Hudson and Patrick White stood up for the Lions. On the back of 23 goals, including seven from Brad Scott, Freeling had a huge win over Gawler Central at the ‘Dog Track’.