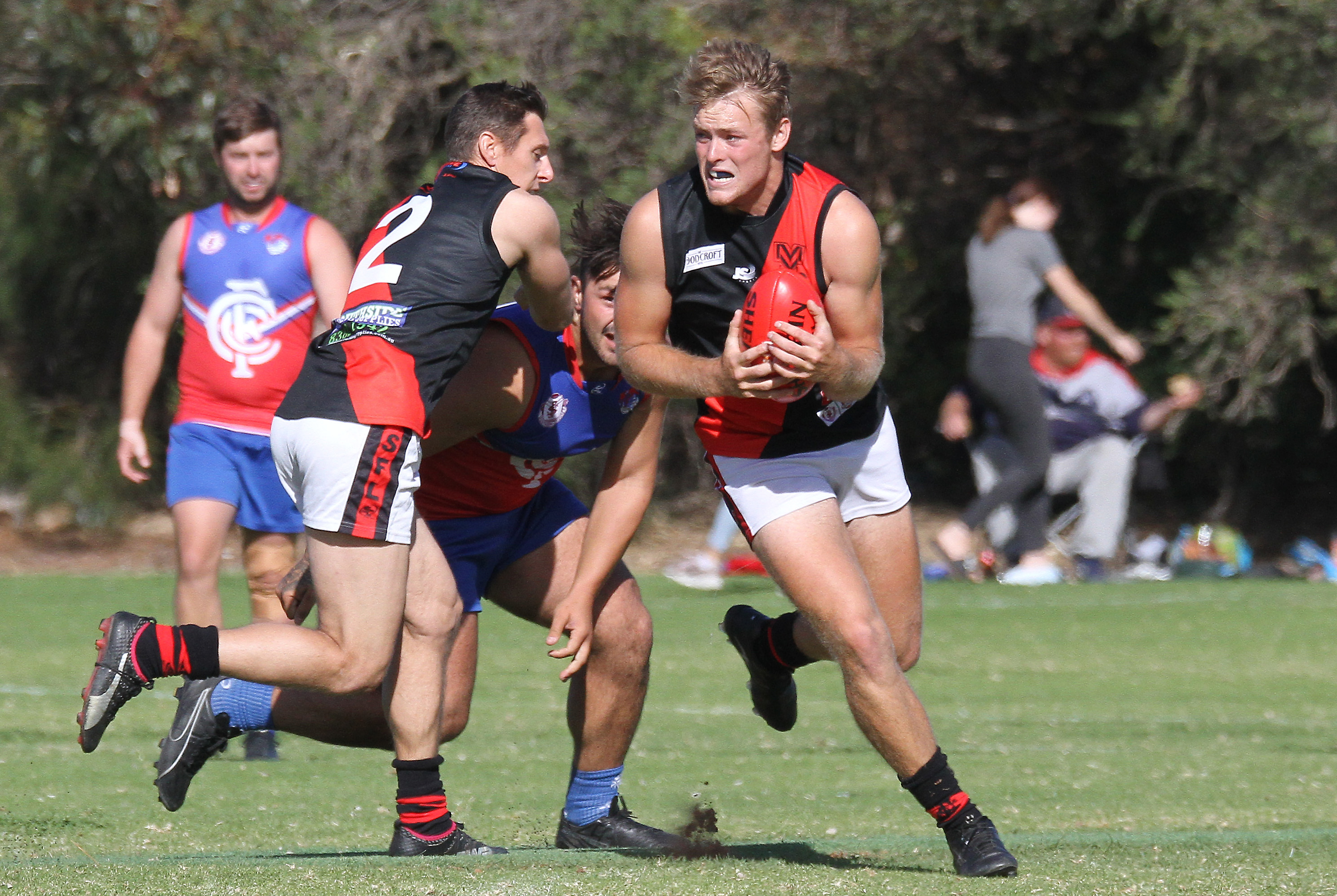 The Morphett Vale Emus travelled to the Cobras’ home ground to take on Cove FC in round three of the Southern Football League.

After an even first quarter, the Emus started to take the ascendancy in this contest, scoring 13 goals to four after the long interval and running out emphatic 71 point winners.

Scott Ridley kicked six goals in the win for the Emus, Connor McCormac finished with four, while Tyron Bennetts and Nathan Bayly each scored three.

Emu on-baller Kalem Greenwood was best on ground followed by Rhys Reynolds, while Shannon Houweling battled hard for the Cobras against the odds.

Meanwhile in the match of the round, Port Noarlunga fell 16 points short against the Mighty Noarlunga Shoes. Precocious talent Terry Milera kicked four goals for the Shoes, who finished the game well with five majors in the last quarter to Port Noarlunga’s two to win the contest. Jake Anderson and Troy Johnson we’re also significant performers for the Shoes in the win.

The Flagstaff Hill Falcons at home had a comfortable 25 point round three win over the Reynella Wineflies.

David Kearsley was best on ground followed by Samuel Smith, while Ryan Mountford was effective up forward with four goals. For the Wineflies, Brian Mahony was their best followed by Dylan Roser and Bailey Marshman. Itwas a one-sided affair in the clash between Christies Beach and the Aldinga Sharks, with Blake Carter booting 12 goals for Christies in their huge 166-point triumph. Aidan Coakley, Nathan Stock and Dwayne Morrison were best for Christies Beach, along with Carter.

Joel Crabb kicked Aldinga’s only goal in the last quarter while Tyler Stewart-England was their best player. The loss was enough for the Aldinga coach to quit immediately after the match.

The closest match of the opening round of the NEFL was between the South Clare Demons and Blyth Snowtown Cats.

Talented ‘Dee’ Ben Dinning was a stand out for the home side at Clare Oval, while Jordan Newton and long-term clubman Mitchell Reynolds were noteworthy contributors. Last year’s premiers, the BSR Tigers (Brinkworth Spalding Redhill) travelled to Robertstown Oval and defeated cellar dwellers Eudunda-Robertstown by 27 points, although the Southern Saints kicked seven goals to four in a more even second half. Evergreen skipper Adam “Mongrel” Mackenzie was best on ground in defence, followed by Jordan Clements and Lachlan Wilsdon who kicked six goals for the game.

Former Adelaide Crows top up player Blake Launer was the Saints’ best, followed by Leigh Kimpton. In a low-scoring affair at Riverton Oval, the Hawks defeated Mintaro-Manoora by 31 points, 9.5 (59) to 3.10 (28). Sam Noack, son of Hawks club legend Ken Noack, was their best, followed by Martin Rohde and ruckman Justin Schahinger.

Veteran Zack Hier, although still in his 20s, and James Vandeleur also were productive for the victors. Recruit Cody Woolford, with two goals to his name, was the Eagles best, followed by super skilled Billy Sandow.

The ‘Plains’ league kicked off with a standalone ANZAC day game between the United Tigers and Mallala at Long Plains Oval. The Magpies dominated this fixture – after being 22 points in front at half time, they went on to convert that lead into an emphatic 75-point victory. Dale King was outstanding for Mallala followed by Reyner Clarke and Sam Angus, while Riley Thorne chimed in with a game-high five goals. Big bustling Angus Bruggemann and Troy Algar both kicked three goals in the win.

Lachlan Connor was considered the Bombers’ leading performer followed by Callum Robinson, while Hayden Bubner kicked four goals for the vanquished. In another one-sided affair, the Hummocks Watchman Eagles had a massive 16-goal win over Virginia at Port Wakefield Oval.

For the Virginia Rams, Joel Holloway, Anthony Bascombe and former Woodville-West Torrens forward Lee Staple stood up against the odds.

Two Wells had a comfortable 28-point win over the Balaklava Peckers at home. Former Central District and Norwood footballer Caleb Edmead was best on ground with a four goal effort, while Matthew Camplin also slotted through four for the Roosters. Brandon Daley and Lachlan Franklin also had their moments in the victory.

In the four-team Eastern Eyre competition, Eastern Ranges started with a handsome 89-point win over Cowell in their trip down the highway. The Rangers were already 59 points up at half-time and won the game 19.10 (124) to 5.5 (35).

Jack Kenny was the Rangers’ best followed by Justin Harris, while Wade Manson was a key target in attack with a six-goal bag.

For the “Green” Cats, David Grey was their best followed by Zane Wykamp and Nick Gale. Kimba Districts travelled to Ports and defeated their hosts by 51 points, despite a strong finish by the Magpies who kicked five goals in the final term. Kurt Maitland was best on ground followed by Shannon Larwood and Dion Woolford, while Joel Fitzgerald kicked six goals and Ben Clements finished with five for the triumphant Tigers. Tom Davey was the Magpies best with three goals, followed by Tyronne Bishop and Brett Bray.

Sid Masters was also productive with three goals as well.